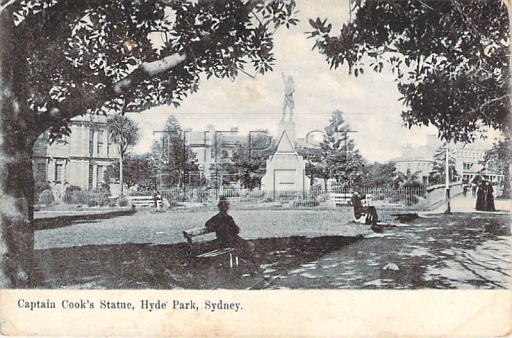 This photo, from a postcard sent in 1926, shows Captain Cooks Memorial in Hyde Park. The memorial commemorates the man who discovered Australia, reminding passers by of the early history of Australia under European Settlement.

Hyde Park has always been an important feature of Sydney, even before the Park was formally set out. By the late 1700’s, not long after Europeans first settled Australia, the area was used as an assembly point for the soldiers. The aim of the area was to provide a place where soldiers could be quickly assembled in the event of a convict uprising. It was also probably the site of a battle between the Aboriginal inhabitants and European settlers for control of the land around Sydney.

Come back next week for the next installment in the Hyde Park Series.