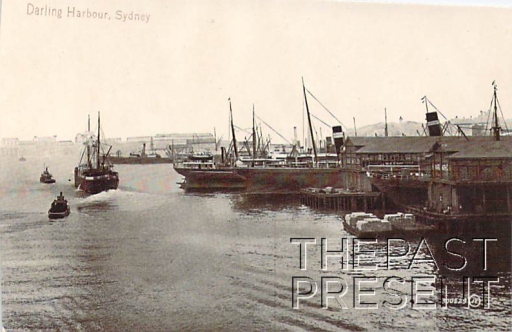 Recently, Darling Harbour has been in the news again with plans afoot to transform the area into a multimillion dollar Sydney International Convention, Exhibition and Entertainment Precinct. Darling Harbour has gone through many changes, one of the most dramatic of which (so far) was the development of the abandoned working harbour, reopened as part of the 1988 Bicentenary Celebrations.

The Darling Harbour of today is very different to the working harbour of the early 1900s, and this redevelopment will see further change. This postcard, from circa 1910, harks back to those days when Darling Harbour was a bustling hub of shipping activity.

Governor Macquarie commissioned the original development of Darling Harbour in 1812 and soon the harbour was the centre of a wharf, market and an industrial and goods-handling precinct. All sorts of goods passed through the Darling Harbour wharves, from coal and wool to live cattle.