This  postcard brings us to the end of a year (as the card says, Happy New Year!), and the end of the Garden Palace, but also to the start of a new year and a new era for the Garden Palace site. The exhibition had gone ahead, despite serious challenges, and the building which housed it was spectacular, but it was short lived and its destruction was just as dramatic as the Garden Palace itself.

Following the exhibition the enormous building had to find a new purpose and over the next few years it was used as office space for Government departments, storage for items ranging from census details to exhibition items and the occasional large event. This all came to an abrupt and dramatic end in September 1882 though, only a few years after the building was completed, when the Garden Palace was engulfed in flame. The beautiful building was destroyed and the collections it housed were lost. Arson was suspected, but nobody was ever charged

People mourned the loss of the Garden Palace, but many also saw the positive side – the people of Sydney now had a large area of their public land returned to them. The site, which had once been part of the public Domain, was added to the Botanic Gardens and named ‘The Palace Gardens’. The original gates to the Garden Palace remain as the entrance into the gardens from Macquarie Street.

The Garden Palace, from ‘Views Of Sydney’, published in the late 19th century

Last week on The Past Present, the Sydney Exhibition planned for 1879 appeared to be doomed. The Agricultural Society did not have the funds for such a lavish event, the Government were refusing to hand over money and public subscription had failed. Of course, the exhibition had to go ahead, it had become public news and people had plans to attend, so reluctantly, in January of 1879, the Government released 50,000 pounds.

The exhibition now had the funding it required, but a whole year had been lost and the exhibition, due to open in August the same year, still did not have a home. A specially built exhibition hall was planned, but there was no way it could be completed so quickly. The exhibition date was pushed back to September giving the workers and contractors less than a year to build the grand palace which was planned! So, work began, despite the fact that the plans had not even been finalised. The Colonial architect James Barnet, who was responsible for the designs, altered them ‘on the run’ and as more exhibitors from around the world were confirmed, more buildings were added to the complex. Proper processes were ignored to speed up the rate of building and lights were installed to allow work around the clock. Due to high unemployment rates there was no trouble finding workers, but many considered the work unsafe. The unions protested and carpenters even went on strike, seeking what could be described as ‘danger money’ for the work they were required to complete, but these protests were unsuccessful.

People feared that the work would not be completed, that it would rain and that there would be no public transport to get people to and from the exhibition. To solve the last issue a steam tram was hastily installed, running from the Redfern tram terminus to Hunter Street. The other problems were more worrisome – the buildings weren’t completed, the exhibits weren’t in place on time, the official opening had to be postponed and rain drowned the plantings around the ‘Garden Palace’ exhibition hall. In the end though, everything came together and Sydneysiders enjoyed the holiday atmosphere of the event.

So what happened to the Garden Palace? Come back next week to find out about the grand buildings demise.

The Palace Gardens, pictured in the postcard above, provide a glimpse into a fascinating event in Sydney’s history. In 1879 Sydney played host to an International Exhibition but the grand building in which it was held, the Garden Palace, was lost to fire in 1882. All that remains are the grand entrance gates, now leading into the Botanic Gardens from Macquarie Street, and the garden which occupies the site – The Palace Gardens. Over the next few weeks The Past Present will look at the history of this garden and the amazing building which once stood here.

International Exhibitions provided countries with an opportunity to showcase their industrial, manufacturing and agricultural might, and since the London Exhibition of 1851, had been quite fashionable. When in 1877 the Agricultural Society in Sydney decided to hold an exhibition, an appropriate building to house the event needed to be found.  At first, the exhibition was to be held in The Society’s Exhibition Building in Prince Alfred Park but when the idea to host an exhibition was made public, there was a great deal of interest – far more than they had expected! The building, and their original plans, would not be adequate.

The Agricultural Society tried to cancel the whole thing, but the Governor stepped in saying it would go ahead, with help from a public subscription. When this did not produce the funds, and the Government voted against a subsidy, the event seemed doomed, but the word was out and people were planning to come! ‘The World’ as The Sydney Morning Herald put it, had forced Sydney’s hand – the exhibition would have to go ahead.

Come back next week to find out what happened next! 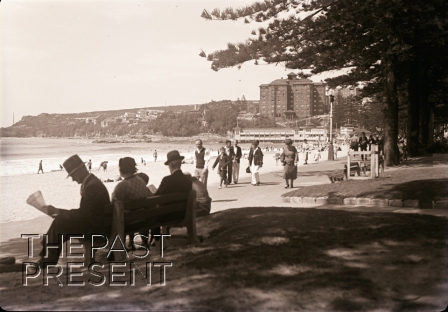 The image above, from circa 1936 and by an unknown photographer, shows a view many Past Present readers may be familiar with – a view at Manly. Summer in Australia brings people out in droves to enjoy the sun and surf and Manly has long been a popular destination for Sydneysiders. The image particularly highlights a feature of Manly which has become almost iconic – the Norfolk Island Pines.

During the late 19th century and into the 20th century Manly was not only one of Australias premier seaside resorts, it was one of the most popular and so it was little wonder that attention quickly turned to beautifying the seaside. According to an article published in The Sydney Morning Herald in 1935 (http://nla.gov.au/nla.news-article17177997) the first efforts to beautify Manly with trees began in 1877 when a committee, comprising the then mayor and some of the Aldermen was created specifically to oversee the process. They sought advice from Mr Moore of the Sydney Botanic Gardens and on his recommendation planted Norfolk Island Pines, Moreton Bay Figs and Monteray Pines. These trees were not planted on the foreshore though, but in The Corso area. Two of The Corso trees, two Norfolk Pines did stand on the beach front though and these were the earliest to be plated on the foreshore.

According to the same article, Mr R. M. Pitt and Mr Charles Hayes were mainly responsible for planting the trees along the foreshore, but local legend suggests it was another man, Henry Gilbert Smith who was responsible. Whatever the case, hundreds of the trees flourished in Manly, especially along the foreshore until the 1960s  when nearly half of the trees were damaged or even killed by airborne pollution. New pines were planted along the foreshore to replace the older trees which were lost. More recently, in October 2013 another three trees were lost and replaced. As a sign of the significance of the trees, a crowd gathered to watch the trees being removed. Council workers began to cut the trunks into pieces and gave them to bystanders who received a slice of Manly history!