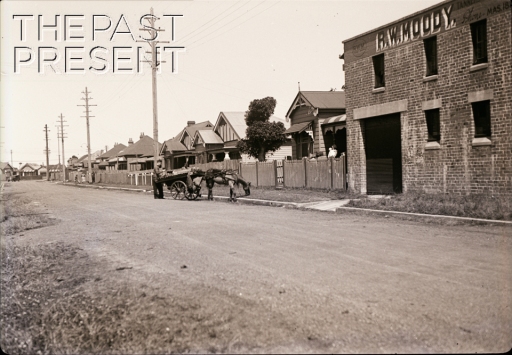 This week, in honour of Chinese New Year, The Past Present is focussing on this beautiful photo from an unknown photographer, taken in 1936. Although the focus of the photographers interest was the tannery belonging to R. W. Moody, today The Past Present is focussing on the Chinese vegetable peddler in the foreground.  Once, up to a third of the Chinese community in Sydney was occupied in growing fruit and vegetables, while others provided accomodation and services to these market gardeners.

The first known Chinese settler in Sydney was Mak Sai Ying who arrived in 1818 and settled in Parramatta, eventually opening a public house called the Golden Lion. Following the end to convict transportation people were brought from China to work as indentured labourers for rural estates and by 1852 over 1500 Chinese had arrived. Of course, then came the gold rush and Chinese people arrived in large numbers to try their luck, though many returned to China later. As mining became less profitable for the Chinese many who remained in Australia turned their attention to the growing and selling of fruit and vegetables. Market gardening became a common occupation for the Chinese, especially as many of the Chinese in Australia had rural backgrounds.

There were more people involved in the market garden trade than just the growers though. The market gardens supported a whole variety of industries, from the gardeners who worked the fields to the people who owned the hostels where gardeners would stay when they brought their produce to the city. Although market gardeners and fruit and vegetable sellers are now seen as almost synonymous, market gardening was extremely labour intensive and although the growers may transport their produce to the sellers, they rarely sold it themselves. Often the fruit and vegetables were either sold by associated hawkers who travelled from house to house, or by green grocers and even large city markets, including Sydney’s Belmore Markets. 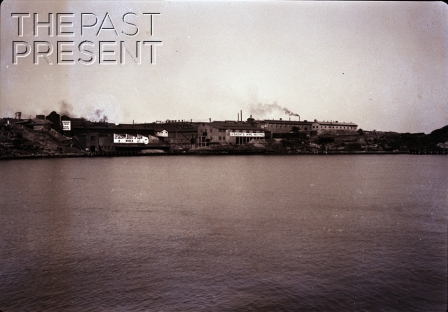 This week, with the year just about to get under way in earnest, and children and parents returning to school and work, The Past Present decided to take a glimpse into what working Sydney looked like in 1936. The photo above, from a 1936 photo by an unknown photographer shows the Lysaght Bros Wire Mill on the Parramatta River.

Lysaght Bros and Co established the Sydney Wire Mill in 1884 on the Parramatta River. The rural, farming community of Australia created a huge demand for fencing, particularly for rabbit proof wire netting, and brothers Arthur and St John Lysaght, sons of the Bristol iron manufacturer and exporter John Lysaght, were soon producing not only these fencing materials, but other products.

With their own wharves, Lysaght Bros and Co imported the wire feed from Germany, unloading the steamships in Sydney and then using barges to carry the materials up the Parramatta River to the factory. Wire making looms, at first powered by steam and then by electricity, transformed the raw feed into a variety of wire products.

When BHP Steelworks opened in Newcastle in 1915 the mills changed to using Australian produced steel rods in their wire making and by 1925 the mills used a massive 35,000 tonnes of steel a year. During the 1930s, a time of depression and work shortages, the Lysaght Wire Mills provided jobs for over 1000 people.

Bondi Beach
From a postcard, circa 1905

With the weather hotting up recently in Sydney, many residents and visitors alike will be flocking to Sydney’s beautiful beaches, the most famous of which is Bondi. Yet Sydney’s beaches, including Bondi, have long been popular family destinations, especially on a hot day! In this post, we explore the early history of the beach.

In the early 1800s, swimming at Sydney beaches was banned, because of fears of sharks and stingrays, and of course, decorum, but by the 1830s, sea bathing was a popular activity, despite being officially banned during daylight hours. By 1851 though, the beautiful stretch of Bondi beach was in private hands, with the land fronting the beach being part of ‘The Bondi Estate’, owned by Edward Smith Hall and Francis O’Brien. By 1877 O’Brien had purchased Halls share of the land, renaming it “O’Brien Estate” and making the area around the beach itself available to the public as a picnic spot and pleasure resort.

With the increasing popularity of Bondi beach, and the increasing numbers of people brought to the area, O’Brien repeatedly threatened to close off public access to his beach. The Municipal Council of Waverly (the second Municipal Council established in Sydney) felt that the Government needed to intervene to make Bondi Beach a public reserve and in June of 1882 Bondi was finally declared a public beach. 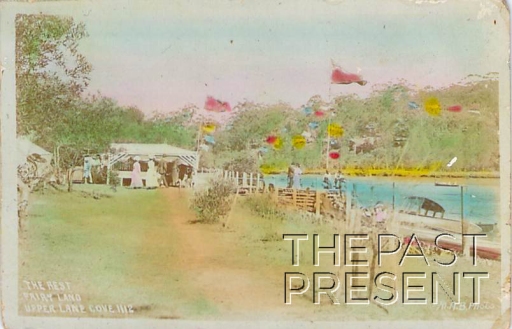 Postcard of ‘The Rest, Fairyland’

Holidays are the perfect time for families to spend a few days enjoying time together. This week, The Past Present decided to take a step back in time, to visit a place where families might have spent their day out in days gone by, Fairyland at Lane Cove.

The area where Fairyland was built, on the Lane Cove River, belonged to the Swan family who purchased the land early in the 20th century and had soon established a market garden on the site. One of their popular crops was strawberries, which were purchased by people boating on the river and eventually, the Swan family began to offer afternoon teas to these passers by. By 1920, the family had recognised the potential for their land to become a popular, lucrative pleasure ground and set about transforming their market garden into what became known as Fairyland.

The pleasure grounds were immensely popular with day trippers and it wasn’t long before rides (including the wonderfully named ‘razzle dazzle’), a wharf, dance hall, kiosk and playground had been built. The Swan family used fairytale characters throughout the area, painting them on buildings, and even making painted, wooden figures which were to be found in the trees – hence the name fairyland. Today the bush has mostly reclaimed the old pleasure grounds, but many remember happy outings on the banks of the Lane Cove River.

Cliffs along north side of Gordon’s Bay

This week, with the Summer holidays well underway and the weather heating up, it seemed the perfect time for The Past Present to share this beautiful photograph. It is from the collection of photographs of an unknown photographer and was taken circa 1936, but it a crisp, clear glimpse into what has long been a popular pastime – boating on Sydney Harbour.

Recreational sailing, and boating in general, was in large part a by-product of Sydney’s role as a working harbour. In fact, in the 19th century some of the earliest races were organised by the captains and crews of visiting ships. They would race the smaller skiffs which large boats carried against crews from other visiting ships, and in time some of the ships even carried a specific racing boat! Over time, regattas became popular as public events with onlookers lining the shore or crowding the harbour with small vessels to watch the races. From 1837 onwards there was even an annual regatta to celebrate the anniversary of the colony’s founding.

As time went by, people began to recognise the potential of hiring out boats and boat sheds with boats for hire began to appear around the harbour, and indeed on other popular waterways. Today, boating on Sydney Harbour remains very popular with boats able to be hired from a number of locations.