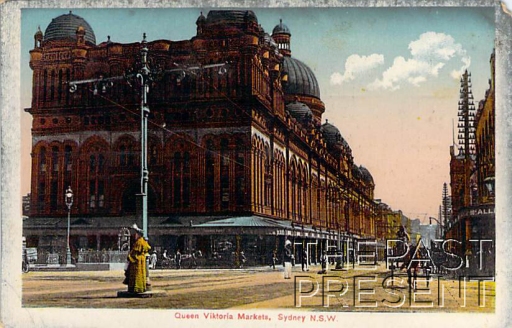 This week, The Past Present decided to look a little at one of Sydneys iconic buildings, the Queen Victoria Building, generally known as the QVB, but originally known as the Queen Victoria Markets as the postcard above shows. This beautiful building has a long and important history in Sydney, and perhaps one which many do not fully realise as they wander or drive past the ornate building.

The QVB was built between 1893 and 1898 as a market building, designed and constructed to replace an existing produce market. In the 1890s Sydney was suffering from an economic depression and many people were without work. The building is very elaborate with beautiful stonework, glass roof areas, large copper domes, stunning stained glass windows, ornate wrought iron balustrades, patterned floor tiles and even statues. The Government used the construction of the building as an opportunity to employ not only out of work craftsmen who worked in these fields, but also general labourers and builders, providing work for huge numbers of people.

Following its completion, the QVB had many occupants over time, including a concert hall, commercial stores, a library and even municipal offices. From the 1950s the building was threatened with demolition, with a parking lot planned as its replacement. In 1982 the building was saved with the council agreeing to lease the building for 99 years to Malaysian company, Ipoh Garden Berhad. The company restored the beautiful building and today it is a popular and exclusive shopping centre.