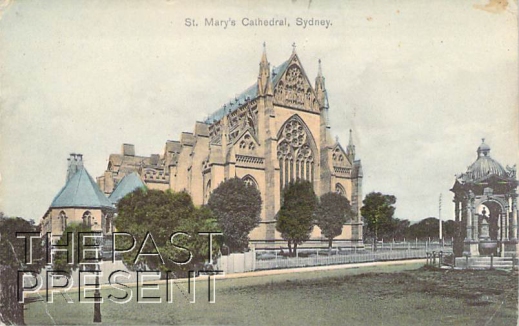 This week, in honour of Easter, The Past Present is focusing on one of Sydney’s most famous and iconic religious buildings – St Mary’s Cathedral. The centre of the Catholic faith in Sydney, St Mary’s is a grand Gothic revival building, constructed out of the local Sydney sandstone.

St Mary’s has a fascinating history, dating back to the Colonial era in Australia. When the First Fleet arrived in Sydney there were many Catholics on board, but it was not until 1820 that official Catholic Chaplains, Fr John Therry and Fr Philip Conolly arrived to serve this community. The following year the foundation stone of St Mary’s Chapel was laid by Governor Lachlan Macquarie. When Bishop John Bede Polding arrived in Sydney in 1835 St Mary’s Chapel became his Cathedral. He became Archbishop Polding, the first Archbishop of Sydney, in 1842.