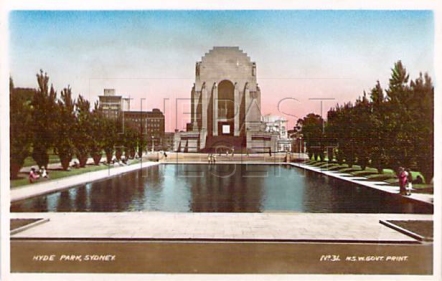 This week, with ANZAC Day falling today, it is a time to reflect on the sacrifices of Australians who enlisted. It is also, as I am sure you are all aware, the Centenary of the start of the First World War. At such a time of reflection and remembrance it was only fitting that The Past Present focus on the ANZAC Memorial in Sydney’s Hyde Park.

The ANZAC Memorial is a memorial to all Australian and New Zealand soldiers who fought in World War One but more specifically it commemorates the Australian and New Zealand Army Corp who landed at Gallipoli on April 25th, 1915. These brave soldiers were the ones who birthed the ANZAC Legend. A year after the landing, a service was held in Sydney in commemoration and this led to the establishment of a fund for a memorial to those who sacrificed all for the cause. By 1918 more than £60,000 had been raised.

At the conclusion of the war it was decided that the grand memorial should commemorate all ANZACs who served during the war. In 1923 the Institute of Architects suggested the memorial be erected in Hyde Park, but instead a Cenotaph was created at Martin Place. In 1929 though a competition to design the grand Hyde Park Memorial was held and 117 entries were received. The winning entry was that of Bruce Dellit, one of the leading Art Deco designers in Australia and included sculptures by George Rayner Hoff. Construction on the memorial began in 1932 and the building was officially opened by the Duke of Gloucester on November 24, 1934.