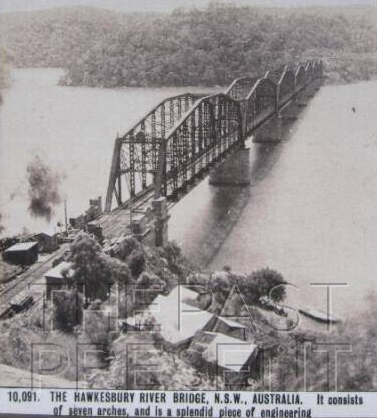 Yesterday, on May 1st, it was the anniversary of an engineering marvel in Australian history. On May 1, 1889 the first Hawkesbury River Railway Bridge was officially opened, and The Past Present decided it was the perfect time to share the beautiful image above with our readers.

The Hawkesbury River Railway Bridge may, at first glance, not appear all that significant. However, the opening of this railway bridge not only fully linked Sydney and Newcastle by rail, but essentially saw the linkage of the South Australian, Victorian, NSW and Queensland railway systems. The bridge (and indeed the currently used bridge which was its replacement) was a vital part in Australian transport history. So significant was the bridge that it was even used by Sir Henry Parkes as a symbol of Federation at his speech to open the bridge (a speech which may claim was his first Federation speech)

Plans to construct a Railway Bridge over the Hawkesbury River began to be put into action in 1886. The contract was awarded to Union Bridge Company in New York, but various subcontractors were involved in the construction work itself. At the time of construction it was an engineering marvel, with concrete piers below water level giving way to fine sandstone masonry above the water. Five of these piers were also sunk to what were then record depths, between 46 and 49 metres below water level. The bridge was constructed with seven spans and the total length of the bridge was nearly 900 metres. The spans were assembled on Dangar Island and from there floated out to the bridge site, approximately 1500 metres away.

In 1927 the bridge needed strengthening, but by the 1930s cracks were starting to appear. In 1946 a new, replacement bridge was opened and the spans were removed from the old bridge, leaving the sandstone and concrete piers as historic relics alongside the newer bridge.