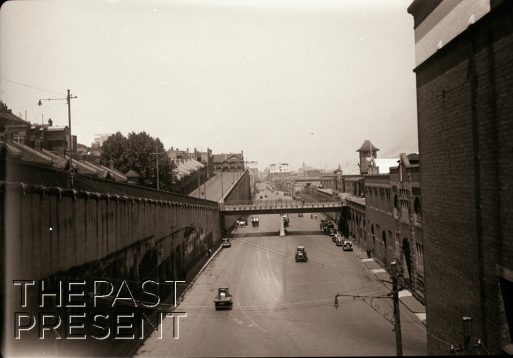 Millers Point is a fascinating area of Sydney with a rich history. It is also an area which many Sydney-siders are quite familiar with and the photo above is not only evocative of the rich history of the area, but shows how similar certain views remain today. Yet Millers Point has also undergone some of the most drastic changes of any area in Sydney.

The 1890s were a time of hardship and turmoil for the people living and working in and around Millers Point. With strikes, depression and the collapse of the wool trade, things looked bleak. The wharves were increasingly insanitary as were the houses. The outbreak of bubonic plague in January 1900 was a heavy blow and became the catalyst for major changes. The area was quarantined, houses underwent compulsory disinfection and anybody suspected of coming into contact with the dreaded disease was sent to the Quarantine Station at North Head under cover of darkness.

In the wake of the plague, and the public fear which accompanied the dreaded disease, the government had all the excuse it needed to resume the area, including the wharves, and begin an extensive redevelopment. The first priority of the newly created Sydney Harbour Trust was to rebuild the wharves, but they also resumed hundreds of properties and by the 1920s whole streets had disappeared, new cliffs had been constructed and many, many houses had been rebuilt. High Street, the largest grouping of these residential buildings, was even constructed during this period in the wake of quarrying along Hickson Road. These were Sydney’s first public housing, but they were not allocated according to need, but instead given by the Trust to maintain their own workforce.

Come back next week for the final installment of The Past Presents series on Millers Point.