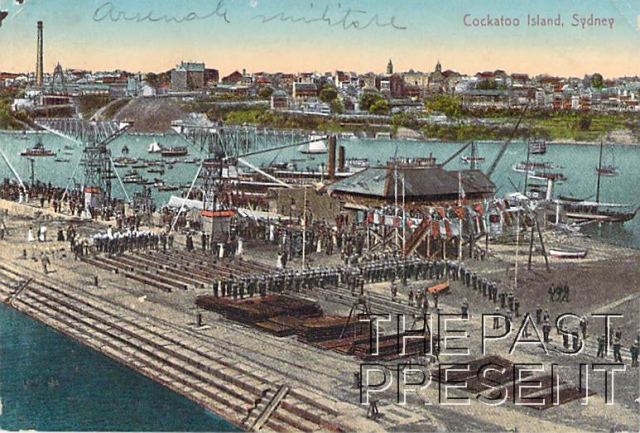 Cockatoo Islands history, in the era of European Settlement, dates back to the early years of the colony when the island was home to a prison which was built in 1839 to alleviate the overcrowding on Norfolk Island. By the 1850s, although still a prison, the role of the island was slowly starting to shift towards naval service with the Fitzroy Dock and a workshop built (by the prisoners in fact) to service the Royal Navy. By the 1880s shipbuilding and repair work done on the island was expanding rapidly and a second dry dock, Sutherland Dock, was built.

During this era the shipyard serviced the Royal Navy, but in 1913, with the establishment of a new, Australian Navy, Cockatoo Island became the Commonwealth Naval Dockyard, servicing not just the Royal Navy, but the new Australian Navy. In fact by 1930 Australias first steel warship had been built at the islands shipyard. Over the 20th century ship building and repair continued to expand, even servicing submarines, but in 1992 the dockyard closed. Today, the island is controlled by the Sydney Harbour Federation Trust and you can visit to discover more of the story of this historic island. 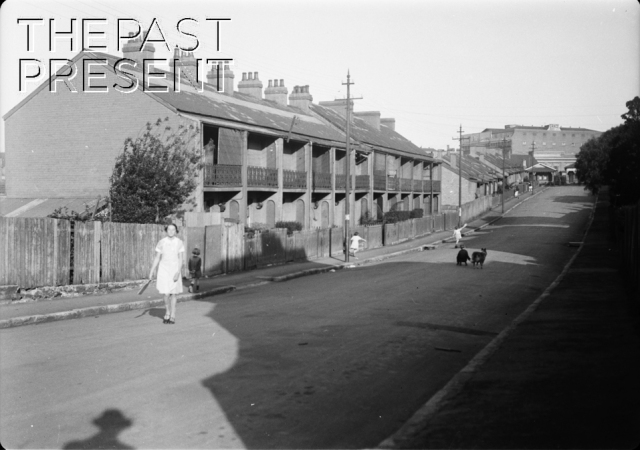 The image above provides an enchanting look at inner city living during the hard years of the 1930s. Girls play in the street in front of their homes, some of the terraces which are such a part of Glebe.

Originally, as the name suggests, Glebe was land belonging to the Church of England, but in 1828 the land was auctioned off and soon after Glebe became a place of elegant homes and pleasure grounds. By the mid 19th century though, there was a clear class distinction in Glebe with the well to do living in the elevated areas while the lower classes lived in the lower and less desirable area, closer to Blackwattle Creek. Glebe became known as something of a mix of classes, made up of middle class, lower middle class and working class neighbourhoods. Not only was Glebe increasingly an area with a variety of distinct class groups though, it was an area of rapid population growth. In fact by 1901, 19200 people lived in the 3737 houses in the area, many of these houses being the terraces which are so characteristic of Glebe.

In the years following 1841 terraces began to appear in Glebe and by the 1870s they had actually become the dominant form of housing. Terraces were perfect for the rapidly increasing population, providing self contained, private houses and of course being economical with building materials and space. Yet although terraces were almost the standard building in the area, there was nothing standard about their design. The terraces in Glebe were built to reflect the period in which they were constructed, and by 1915 a mosaic of different styles could be found, ranging from colonial to Georgian, Victorian Gothic to Regency. Increasingly, these terraces were the homes of the lower classes, especially following the outbreak of the Bubonic Plague. The middle classes increasingly sought the space and sanitary conditions of the suburbs further from the city centre and Glebes distinct classes became far more difficult to separate. Today of course, Glebe is once again a trendy place to live with a mix of people, cultures and backgrounds making up the community.

There are several photos of Glebe in the collection, so keep an eye out for more posts about this historic area of Sydney. 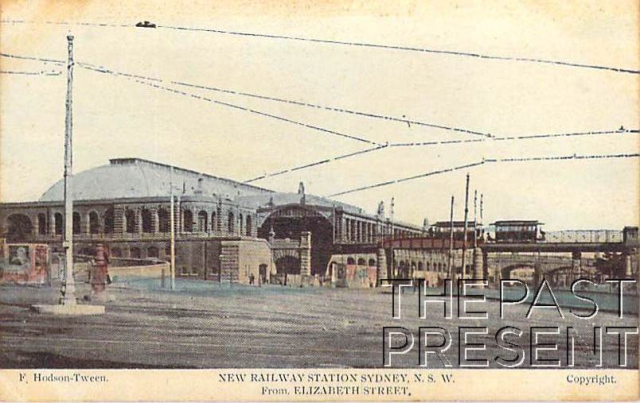 The postcard above is a beautiful snapshot, showing Sydneys grand Central Station, the station which was built to replace the dingy and congested Redfern Terminus. The postcard probably dates to very soon after the new railway station first opened in 1906 as the grand tower is not yet built and of course, the postcard lauds the ‘New Railway Station’.

By 1900 Redfern Terminus was disliked by passengers and crew alike, sparking increasing agitation for a new and improved station, closer to the city itself. Yet as far back as 1888 there had been interest in moving the station to a more central location. This is when Railway Commissioner Eddy made inquiries about moving the terminus, resulting in a Royal Commission. In 1891 the Commission recommended two new stations, one at the Benevolent Asylum site and one in Hyde Park, but the depression of the 1890s meant that no action was taken. Another request to move the station was made in 1896, and another Royal Commission was launched, recommending that a single larger station be built in Hyde Park, facing St James Road. The public, though wanting a more convenient station, objected strenuously to the loss of public parkland, and the scheme was abandoned in 1899. It was clear though that a new station was needed and in 1900 State Parliament agreed to the plan of E. W. O’Sullivan (the Minister for Public Works) to build the new station north of Devonshire Street, close to the existing terminus. The public would have its new station, but not their City railway extension.

Plans for the new station were signed off on November 2, 1901, but construction would not be able to commence until the existing buildings and even a cemetery had been removed. The original depot of the steam tramway, a convent, police barracks and the Benevolent Asylum were all demolished while the graves in the Devonshire Street Cemetery were relocated. On April 30, 1902 Minister O’Sullivan laid the foundation stone and construction commenced. The station opened on Saturday, August 4, 1906. 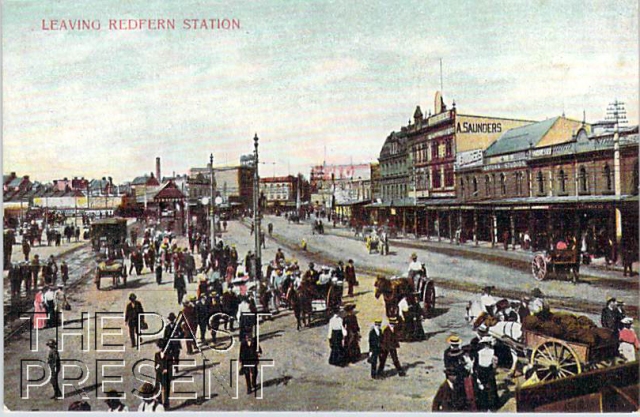 When we think of the centre of train based transport in Sydney, most of us today immediately think of Central Station. Yet once, before Central Station even existed, another station was at the heart of Sydney transport. This station, originally known as Cleveland Sydney Station is better known as Redfern.

Redfern Station has its origins in 1855 when a simple station with a single wooden platform and corrugated iron shed was built. This simple and rather humble station was the first terminal station in Sydney. In 1856 the station was slightly upgraded with an engine shed, carriage shed and goods shed built at the site, and as time marched on the station continued to be expanded in order to deal with an ever expanding railway network.

By 1874, a grander and more appropriate building and station had been built to accommodate the important Sydney Terminal Station. The station was designed by the famous NSW Government Railways Chief Engineer, John Whitton and construction of the grand new building began in 1871. The new station was built using both brick and stone and was considered, at the time, one of the most beautiful public buildings in Sydney. Unfortunately, the beautiful building could not hope to cope with the ever expanding railway network and its patrons. The increasing length of trains reduced the effectiveness of the platforms, the site was congested, and the station was unable to truly cope with the 25 million passengers who passed through it in 1899 alone! In addition, passengers who were traveling to the city itself had to disembark from the train and transfer to trams or horse and carriage and then travel through the busy streets around the station and on to the city. Of course, this led to the area around the station itself becoming increasingly congested and unpleasant. By 1900, passengers and crew both heartily disliked the station. Today, the beautiful and historic station continues to operate, and indeed is the closest station to Sydney University. It now offers a much more pleasant experience!

Come back next week to find out about Central Station – the station which replaced the despised Redfern Terminus.