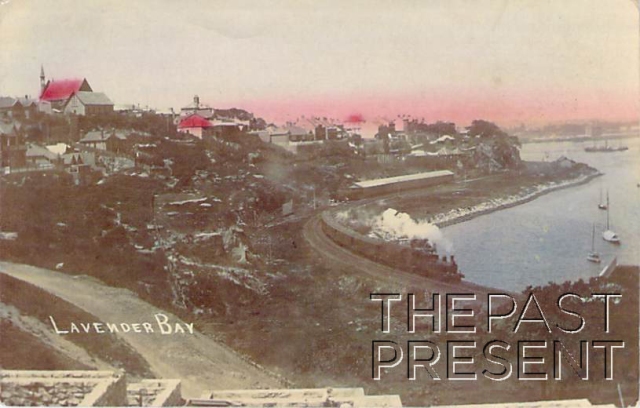 The image above shows a view which many Sydneysiders are not only familiar with, but which many enjoy on special occasions like New Years Eve. Lavender Bay is a popular foreshore area, not least for its historic fun park, Luna Park. However it is the train in this image which is of particular significance.

Construction on the Milsons Point extension to the existing railway began in 1890, with the track running between Milsons Point and St Leonards. The extension would complete the North Shore Link, finally connecting the harbour to Hornsby. The Milsons Point station itself was a transport hub, connecting trains, ferries and trams, but it stood near to where the Northern Pylon of the Sydney Harbour Bridge now stands. In 1924, planning for the construction of Sydneys famous bridge meant that the station needed to be relocated. A site was chosen in Lavender Bay, down at water level below Glen Street.

This was not the first time this site had been used as a station though. In 1915 the Station was first opened to the public with plans for it to replace Milsons Point Station. Passengers did not approve though, refusing to leave the train and demanding the trains continue to and stop at Milsons Point. The walk to the trams in Glen Street on the escarpment above was steep and the ferry company were unhappy with servicing two wharves when one would suffice. The Lavender Bay Station only lasted for a total of seven weeks before the original service resumed to Milsons Point.

The remodelled station avoided these problems though, with long escalators taking commuters from water level to Glen Street where the commuters could connect with the tram network. A new ferry wharf was also built to connect the station to the ferry network. The escalators were actually the first in Australia and were relocated to Wynyard Station when Lavender Bay Station closed in 1932 (following the opening of the Sydney Harbour Bridge and the new Milsons Point Station). They are apparently still in use today.