The Wool Exchange, also known as The Royal Exchange

The image above shows a grand building which once was at the heart of Sydney’s business activities. The postcard describes the building as the Wool Exchange, but in actual fact its proper name is The Royal Exchange. However, the building was the site of wool auctions in Sydney and in time became the worlds greatest centre of wool sales.

Although the Royal Exchange can trace its history back to the 1820s, it was not until 1851 that the Royal Exchange Company was formally created. The aim of the company was to create a place where the business community of Sydney could meet and conduct business. Land was granted to the company in Gresham Street and by 1857 the building was complete. Many leading citizens of Sydney’s business world soon became members of the exchange including John Fairfax, T S Mort, Robert Tooth and W C Wentworth.

The building itself may have a fascinating history, but what went on inside the walls is truly remarkable. The first telegraph message sent in NSW was sent from the exchange on the day that it opened and within a week a telegraph line was installed linking the exchange directly with the signal station at South Head. Many prominent associations of the time were formed within the walls of the exchange including the Royal Humane Society of NSW and even early attempts to form the Chamber of Commerce were undertaken here! NSW first telephone system was installed in the exchange in 1880, connecting the exchange with the Darling Harbour Woolsheds. Just weeks later numerous wharves had been connected and by 1882 there were 300 subscribers to the system. Even the first public demonstration of electric lighting in the colony took place here, being held in the dining room on the 6th of December 1882.

Although The Royal Exchange itself still exists today, in the same location, the beautiful building which was once such a prominent landmark and bore witness to so many historic events is now long gone, replaced by a modern Royal Exchange. 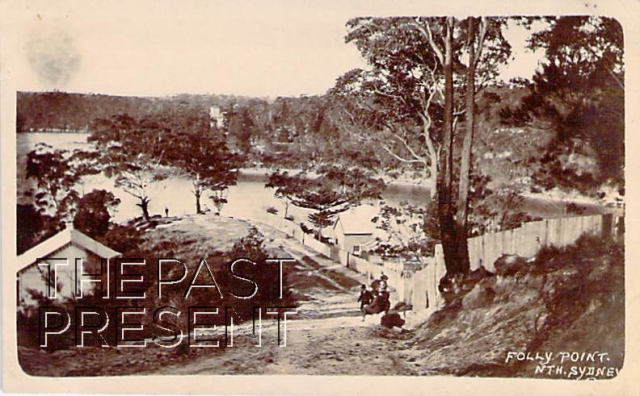 The image above is a glimpse into the history of an area of North Sydney which today looks very different. Folly Point and Cammeray more generally were once an area given to dairy farming and quarrying, but today Cammeray is a built up area full of homes, manicured gardens and handsome tree lined streets.

Cammeray is named after the Cammeraygal, the Aboriginal group who lived in the area. Though this name has a clear derivation, the name Folly Point is a little more mysterious. Such an evocative title – but what was the folly to which the name refers? Sadly nobody truly knows how the name came to be. There are two main theories though. Some suggest the area is named after Captain Charles McKinnon who was the commander of explosives hulks moored in the Seaforth area. The folly itself in this theory remains something of a mystery. The second theory suggests that a landowner in the area, by the name of Levy is responsible for the name. Apparently he built his house on Folly Point, but he mixed his mortar with the salty sea water and the house collapsed. The name folly refers to the fact that he then did the same thing again, with the same results.

However the area came to be named, it is an area which has played an important role in Sydneys Depression era history, not just in the Great Depression but also the previous 1890s Depression. During the earlier period of depression a shanty settlement grew up in the bushland at Folly Point. It was known as Tin Town and became home to many out of work Sydneysiders. It was also during this period that talented Australian poet Barcroft Boake tragically committed suicide at Folly Point, hanging himself with his stockwhip. Tin Town persisted after the depression ended and when depression again hit in the 1930s it was still a working settlement. Again, the unemployed moved into the rough tents and shacks. 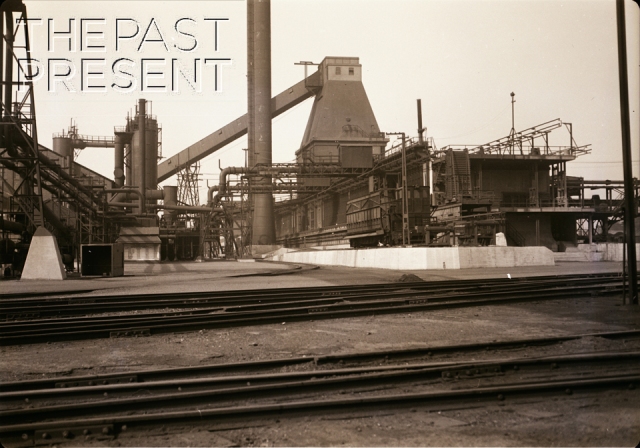 The image above is a stark and I think artistic view of a trade which was once central to Newcastle and the area. Although now gone from the area, BHP once employed vast numbers of Newcastle residents, and supplied still more who worked in the mines supplying raw product, with jobs.
In the early 1900s Australia was demanding more and more steel and in 1911 BHP (Broken Hill Propriety LTD) decided to step in and begin to manufacture the precious resource. They decided Newcastle would be the perfect place to build their steelworks as there was a harbour which could be used for transport, a ready workforce, and they already owned land in the area. The steelworks opened in 1915.
In order smelt iron and make steel, another product was needed though – coke. To smelt iron the iron ore has to be reduced and to do this, you need carbon. Burning carbon creates carbon monoxide which reacts with the iron ore. Combine this with high heat and the iron melts and can be drained off. Coking coal is a fuel with very few impurities and an extremely high carbon content which is made from coal and widely used in the steel industry.
BHP in Newcastle made its own coke on site. To do this, they needed coke ovens which could heat the coking coal to very high temperatures, driving off impurities and leaving behind coke. This could then be either stored or transferred directly to the blast furnaces.

Last week, as many readers will be aware, the Lancers Parade was held in Parramatta to commemorate 125 years of the Royal New South Wales Lancers. What many do not know is about the important history of this military group in Australia’s and indeed world history.
The Royal New South Wales Lancers were formed in 1885, though they were then known as the New South Wales Cavalry Reserves. They were renamed the New South Wales Lancers in 1894, but the ‘Royal’ in their title was not added until 1935. Today they are known as the 1st/15th Royal New South Wales Lancers. Since the late 1800s their barracks have been located in Parramatta and their nickname is the Parramatta Lancers. The Barracks themselves predate the formation of the Lancers and have a fascinating history in their own right.
The Lancers have a distinguished history of active service, dating back to the Boer War. In 1899 a squadron of the Lancers who had been training in England were the first Colonial troops to actually arrive in South Africa. During the 1st World War, the Lancers were a militia unit and as a result they did not serve abroad, though they did receive a number of battle honours. However, many pre-war members of the Lancers did join up for service, joining the Australian Imperial Force. Many of them served in the famous Light Horse Regiments which fought in Gallipoli, Sinai and Palestine. In fact the Light Horse Regiments included a substantial number of Lancer trained men. Subsequently the Royal New South Wales Lancers were actually designated the successors of the 1st Light Horse Regiment and later still, in 1956, the 1st was linked with the 15th, making them also the successors of the 15th Light Horse Regiment. During the 2nd World War the Lancers were incorporated into the 2nd AIF as an armoured regiment and served in New Guinea and Borneo. In fact, the regiment made the heaviest Australian tank attack of the war.
Since the 2nd World War, the Lancers have continued to serve, with full time units seeing service in Bougainville, Malaysia, East Timor and the Solomon Islands. They currently hold 21 military honours, making them one of the most decorated units in the Australian Army.