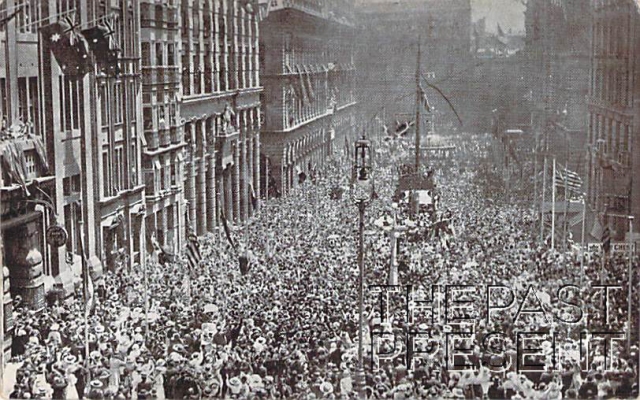 This week, with Remembrance Day nearly upon us, The Past Present is taking the opportunity to share the joyous scene in the image above.
When peace was declared on the 11th of November, 1918, Sydney residents were jubilant and enormous public celebrations began to occur. The news came through early in the morning, but spread quickly and soon Sydney was a mass of excitement. Sirens associated with the harbour sounded in a cacophony rarely heard, trains blew their whistles, trams rang their bells and cars sounded their horns in a joyous (if probably rather dissonant) celebration of peace. The streets quickly filled with cheering crowds and soon enough patriotic bunting was hung and flags began to appear, being waved frantically from amid the excited throng.
Moore Street was just one street which filled with people celebrating the long awaited peace and the photo above captures the excited throng which flocked to the celebrations. If you look closely though, you may notice that women outnumber the men taking part in the celebrations, reflecting the fact that many of Australia’s menfolk were still abroad, serving in foreign theatres of war, or had already lost their lives to the conflict.