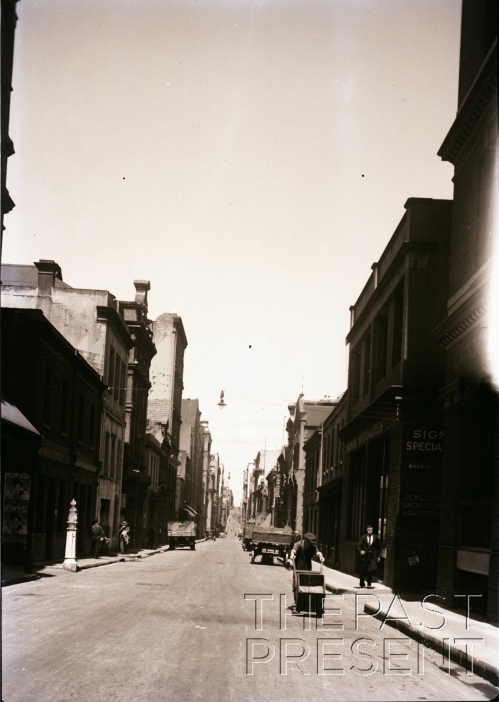 The Past Present has decided that this week it is time to head further afield and visit one of the other capitals which features in the vast collection of images. This image of Melbourne, taken circa 1936 by an unknown photographer is a beautiful and evocative snapshot of Melbourne’s Little Bourke Street (south) and a few of its residents.
Little Bourke Street is at the heart of Melbournes historic Chinatown district. In the early 1850s Chinese people began arriving in Melbourne seeking fortune on the Victorian goldfields. In 1854 lodging houses for these immigrants began to appear with the first being in Little Bourke Street and Celestial Avenue. The area was cheap, convenient and the immigrants could purchase supplies on their way to the goldfields. Soon enough merchants, stores and even benevolent societies began to appear, all aimed at the new and ever changing community of the emerging Chinatown. Following the gold rush many people in rural areas began to move to the cities and for the Chinese immigrants Little Bourke Street was the ideal location. It served as a focal point for the Chinese in Melbourne with many living in the area, but others simply visiting for meals, to gamble, to smoke opium or for religious ceremonies.
By 1900 Melbournes Chinatown was well established and between the turn of the century and 1920 it grew rapidly. In the 1920s and 1930s though, with restricted immigration and a shift towards establishing businesses outside the central business district, Chinatown began to shrink. In the postwar era new immigrants arrived, but Chinatown continued to diminish until in the 1940s and 1950s people began to suspect it would disappear entirely. In the 1960s, fortunately the area was saved and today Melbournes Chinatown is one of the oldest in the Southern Hemisphere.