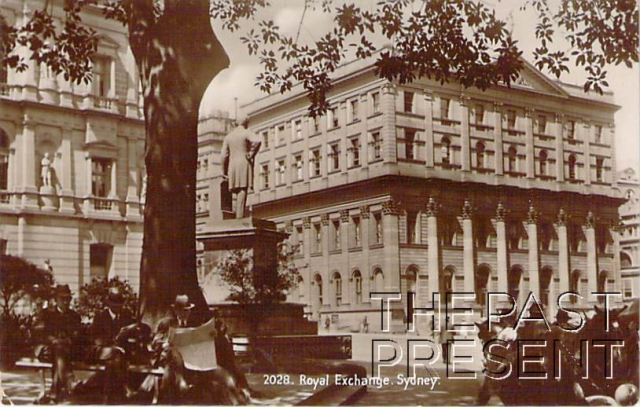 The image above is a glimpse into the past of Sydney, and at a building which today looks vastly different to the one which once stood proudly at the heart of Sydney’s commercial district. The Royal Exchange may still have a building, and even stand in the same position, yet nothing remains of the original sandstone building – today we see a modern construction like so many others of Sydney’s buildings.

The Royal Exchange building, as seen in the image above, was officially opened in 1853. It stood on the corners of Gresham, Pitt and Bridge streets (where the new Royal Exchange Building still stands today) and was just one of the buildings which demarked this areas as the financial heart of Sydney in the 19th century. The Royal Exchange was an important building, acting as Sydney’s first stock and wool exchanges.

The Royal Exchange was also the first building in Australia to set up a ‘Telephone Bureau’, installing Australia’s first switchboard in 1881. Subscribers to the service had to pay for everything from the poles, to maintenance, but the system was a success and just a year later there were 30 telephone lines linked to the switchboard. However, not long after this sign of success, and less than five years after the switchboard was installed, an electrical short circuit burned out the original switchboard during a thunderstorm. The Royal Exchange decided against installing a new switchboard, handing the business over to the General Post Office instead. None the less, the Royal Exchange remains Sydney’s and indeed Australia’s first real telephone bureau!