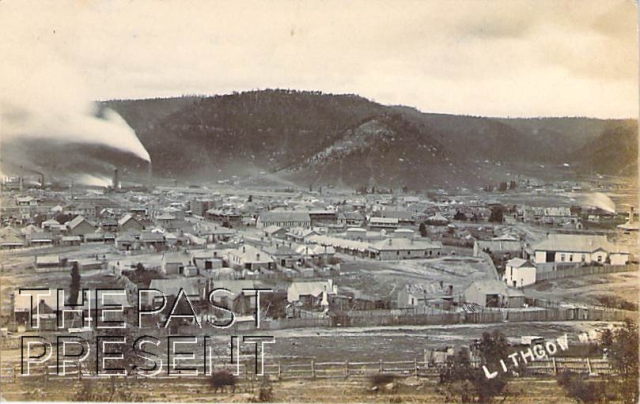 This week, The Past Present decided it was time to again investigate an historic location outside of the Sydney area. Australia is full of historic towns and even isolated places and buildings have their story to tell. Lithgow, which many Sydneysiders are familiar with, is one of these fascinating historic places, and looks at once similar and yet markedly different to the view captured in the postcard above.
Lithgow, which is named in honour of Governor Brisbane’s private secretary, was named in 1827 by by Hamilton Hume, just three years after the first Europeans arrived and settled the valley. Yet settlement in the valley was slow, and by 1860 only four more settlers had arrived. In 1869 though, the Western Railway Line (using the famous Zig Zag Railway) was built to Lithgow and the area quickly grew. With a combination of coal fields and easy transport by rail, various industrial workings soon began to appear, and the already established woollen mills prospered. In 1875 a Blast Furnace was built and by 1900 steel, the first to be smelted in Australia, was being produced. A meat refrigeration plant was also established in 1875 and soon there were breweries, brickworks, copper smelters and even pipe and pottery workings established in the valley. In the early 1900s a small arms factory was also added to the vibrant working town.
Today, most of these industrial workings have long since closed, becoming historic sites rather than booming businesses. Yet the postcard above captures Lithgow in its industrial heyday, including the plumes of smoke from the smelting works which would once have been such a part of the skyline.