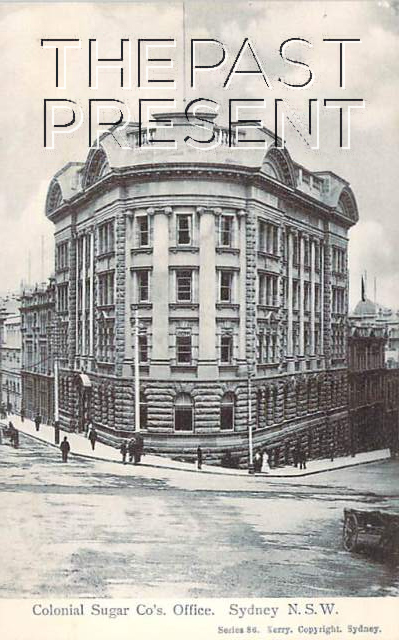 This week, with what would once have been Commonwealth and Empire Day nearly upon us, The Past Present decided it was a perfect opportunity to examine one of the buildings in Sydney once firmly associated with Colonial industry – the building of the Colonial Sugar Company. The building featured in the image above once stood in O’Connell Street, but was demolished in 1962.

The Colonial Sugar Company, also known as the Colonial Sugar Refining Company (or CSR as we know it today) has its roots back in 1855, when the company was founded by Sir Edward Knox. Knox had come to Australia in 1840 and tried his hands at a number of different industries before purchasing a sugar refinery and distillery in 1843. He leased this to the Australasian Sugar Company but, when that company failed in 1854, he decided to found a new company, the Colonial Sugar Refining Company. CSR began its life in Canterbury at a refinery originally owned by the Australasian Sugar Company, but moved many of its operations to Chippendale within just a few years as there was a better labour source. Water supplies to the refinery were a matter of considerable consternation though, both for the sugar refinery itself and for locals living in the area and in 1875 the company began to build a new refinery at Pyrmont, where industry thrived and there were less residents to complain about water and pollution. Eventually, CSR became so successful that not only did they own an enormous area in Pyrmont, but they had set up refineries in other Australian colonies, and also in New Zealand and Fiji.