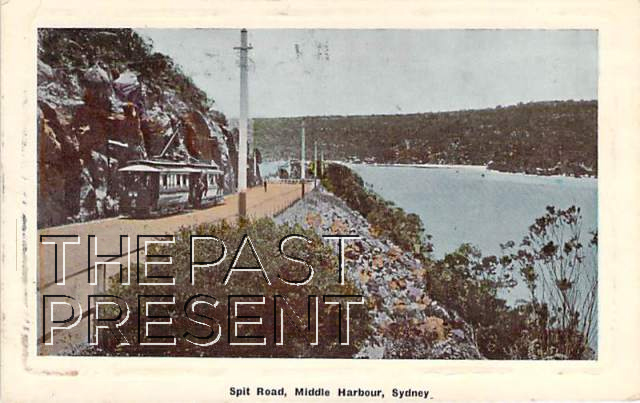 This week, The Past Present is sharing a postcard image of a road many Sydneysiders are familiar with, Spit Road. Yet there is a feature of this card that many Sydney residents may wish was still in place – this postcard features a tram.
Once, Sydney had a vast network of tramway which, at it’s height, was the largest tram network in all of Australia and one of the most extensive in the world! The first trams in Sydney were horse drawn, and travelled between Sydney Railway station and Circular Quay, but the track stood up from the road and caused accidents, so campaigning led to its closure in 1866.
By 1879, the tramway had been replaced by a steam tram system and this was a great success. The system rapidly expanded, covering more of the city itself, and even extending to some of the inner suburbs. Electrification of the lines began in 1898 and most lines were fully electric by 1910. At their height, the tram lines travelled to places as varied as Watsons Bay, Manly, Balmoral, Chatswood and, as the postcard shows, also to The Spit.
The system began a gradual decline in the 1930s and the last of the original Sydney tram services ceased in 1961, with the last route to close being that to La Perouse.