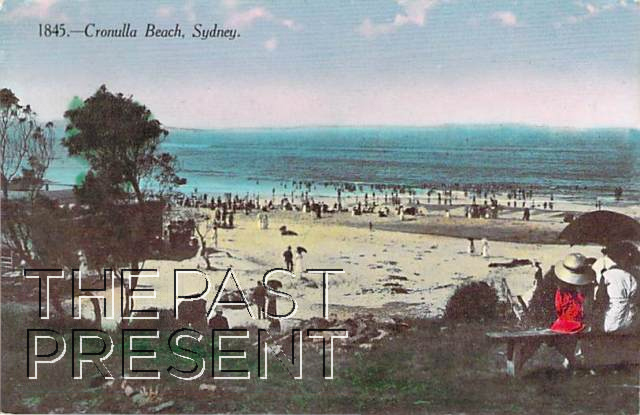 This week, as Autumn gets underway, many Sydneysiders will be looking to enjoy the last weeks of warm, beach-going weather. Sydney is blessed with an abundance of beautiful beaches, some of which are even internationally famous. The image above shows one which although perhaps not quite as famous as beaches like Bondi and Manly, is extremely popular with Sydneysiders – Cronulla.

The word Cronulla is believed to come from an Aboriginal word Kurranulla, which means place of pink seashells, and the beach has long been an attraction to the area. In 1827/1828, Surveyor Robert Dixon visited the area and named several of the beaches, though the main beach was called by the Aboriginal name Kurranulla. When the Illawarra Railway Line to Sutherland was built in 1885, this allowed people to easily access the area and Cronulla became popular for picnicking, fishing and swimming. Many visitors even rented beach houses for school holidays, and The Oriental Hotel was built in 1888 by Captain Spingall to cater for the abundant visitors.

In 1907 the Cronulla Surf Life Saving Club was established, making it one of the first in the entirety of Australia. Today, we see the club operating from a beautiful art deco building which was built in 1940, but the club originally made its home in an old tram carriage! The club continues to be a strong force today, with 1200 members of the club, including over 600 nippers. In fact, Cronulla Surf Life Saving Club has actually won three World Championships, and is consistently placed in the top 10 Australian clubs, and has been for the past 20 years