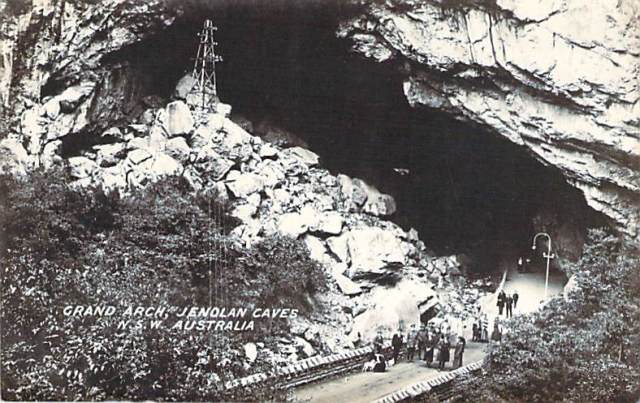 This week, in the final instalment (for now) of The Past Present’s series on Jenolan Caves, we focus on the discoveries of various show caves, and how these discoveries were made.

By 1900, Jenolan was well established as a tourist destination, yet many of the most famous show caves were not yet discovered. In 1903 James Carvosso Wilburn was made Superintendent of Caves, and it was during his tenure that many of the caves we visit today were discovered. In fact, in 1903 alone the River and Pool of Cerberus Caves were both discovered, with the River Cave being opened to public tours in 1904. In 1904 the Temple of Baal, Orient and Ribbon Caves were also discovered, with The Temple of Baal and Orient Caves being opened to public tours in 1909 and 1917 respectively.

Today, when we visit and explore the caves, we are assured paths, lights and a safe passage, but exploring unknown caves, or even going on one of these early tours was a very different experience. In the 1800s, and well into the 1900s, all cave exploration was carried out by candlelight, and there were certainly no paths or ladders in place. Exploration could be dangerous, and even after caves were opened to public tours, the experience was very different to what we know today. Many of the caves have had new access routes built, some even blasted into the rock to allow people to easily enter the caves, and most visitors will wear sturdy shoes and clothes suitable for cave exploration. Women in the past though had to abide by fashions of the time, and explored in long skirts and even corsets, as the photograph above shows.