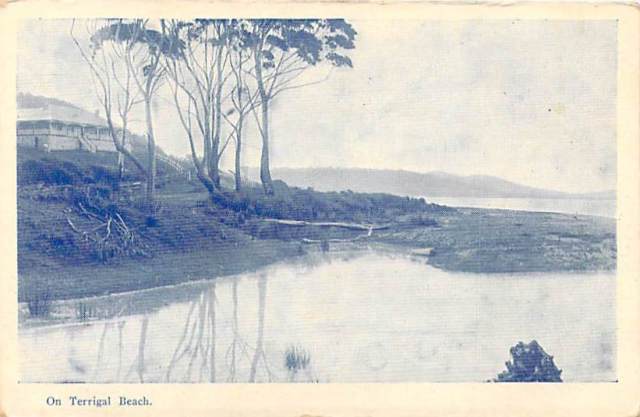 With the weather rapidly cooling down, it seemed the perfect time for The Past Present to focus one last time on a beach before Winter hits properly. Many Sydneysiders have spent the recent holidays enjoying the last of the warmer weather with a beachside holiday. Many have headed up the coast to the Central Coast, like the one featured in the image above – Terrigal Beach.

Today, Terrigal looks very different to the Terrigal featured in the image above, with abundant shops, hotels and houses. Yet Terrigal was once a much quieter place, and in fact, until the 1970s, had only one market, one medical practice and a lot of orchards! The first European settler in the area was John Gray who arrived in 1826. He named his property Tarrygal, after an Indigenous word he heard the original inhabitants, the Awabakal Aboriginal people using. Tarrygal was believed to mean place of little birds. In the 1870s a sawmill was opened, with a tramway to run timber to a newly built jetty, where it would be shipped to Sydney. Soon after dairying became an important part of the area.

Tourism though was slower to arrive, not really beginning to impact the area until 1889, when the Sydney to Newcastle Railway was opened. Roads were built, and people did visit the area for the healthy sea air and for leisure. A life saving club was established in 1925 and beach houses were increasingly let to tourists who came to the area for holidays. Yet Terrigal remained a sleepy coastal town, right up until the 1960s and 1970s, when tourism to the area really boomed. In the 1970s the first high rise hotel was built, and the future of Terrigal as a tourist resort was set.