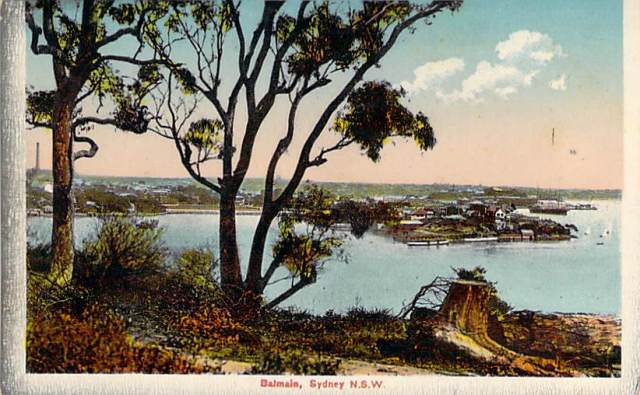 This week, The Past Present is sharing a postcard image of a place in Sydney which has undergone vast changes over the history of European colonisation – Balmain. The area is one which many Sydneysiders would be familiar with, yet the postcard view above is remarkably different to the Balmain we see today.

Grants in the Balmain area began quite quickly after European colonisation, with the first being given in 1800 to the colonial surgeon, William Balmain, after whom the area is still named today. Yet true settlement of the area was much slower, as Balmain was difficult to access, with no transport to the area. When ferry services began to the area (with Henry Perdriau establishing a steam ferry service in 1842), it became much easier to access the area, and the suburb really began to thrive. At this time, people were reliant on ferries, steamers and other ships for travel, and a thriving community of ship builders soon moved into the area too, bringing not only work, but workers who wished to live near the shipyards. With new families moving to the area, services were needed to support the growing community, and soon enough shops, churches, schools, police services, and even a hospital were established. In 1860, Balmain Council was even opened.

By the 1880s many claimed that Balmain was the leading social suburb in Sydney, complete with clubs such as those catering for rowers and cricketers, and institutes such as the Balmain School Of Arts. Yet it was also this same suburb that was, in the 1880s, increasingly overcrowded and poorly organised. Soon enough the suburb went into decline, businesses and industries closed down and people moved out, being replaced by younger, poorer families. By 1933 nearly 40 percent of workers living in Balmain were actually out of work. It would not be until the 1970s that the gentrification of Balmain began to occur, leading to the affluent and popular foreshore suburb we see today.