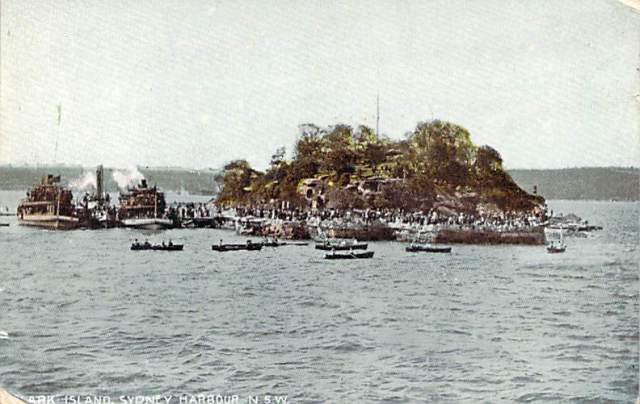 The image above is a wonderful snapshot of day out and about on Sydney Harbour. It shows one of the beautiful harbour islands simply teeming with visitors, perhaps waiting to watch one of the yacht races which were once so popular – perhaps even The Sydney To Hobart Race itself. Yet the island in question, Shark Island, is one which was not always publicly accessible.

In the 19th century, Shark Island was an important link in the colony’s quarantine system, and from 1871, was the quarantine depot for animals arriving from overseas. Yet many local Sydneysiders felt that the beautiful harbour islands, including Shark Island, should be made available as public reserves. The pressure of public opinion was such that in 1900, the NSW Government made Shark Island a public reserve, though it didn’t officially open to the public until 1905. Before being opened officially, the Clark Island Trust, which had been established in 1892 to beautify and create visitor facilities on Clark Island, worked to improve the amenities and beauty of Shark Island. Their intention was to create on Shark Island an Edwardian style English picnic park, and they constructed paths, shelters, seating and gardens. Then, in 1917, The Sydney Harbour Trust took over the management of the island and made more improvements, including the construction of new paths. The Sydney Harbour Trust continued to be responsible for the island until 1975, when Shark Island became part of the Sydney Harbour National Park.