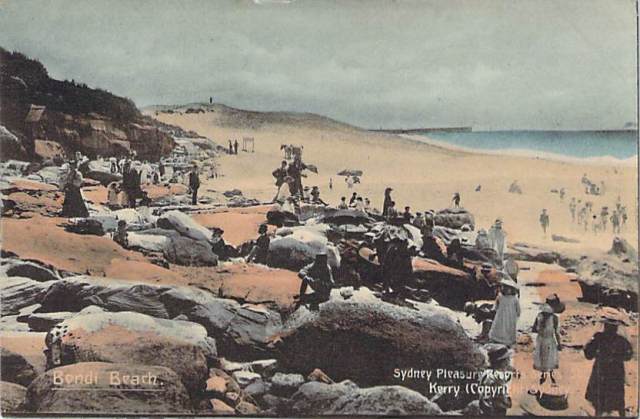 Australia has a long and proud history of swimming and beach culture. Indeed, for most overseas visitors a visit to an Australian beach is a nonnegotiable feature of an Australian holiday. Many of these visitors will be making tracks for the beach pictured above, itself one of Australias most iconic beaches – Bondi.
For many Sydneysiders, Bondi Beach may be overcrowded and over rated, yet historically, it is one of Australias more important seaside resorts. The first formal settlement in the era after European colonization came in 1809, when a road builder, William Roberts, was granted land at what is now Bondi. This grant, which comprised 81 hectares, was given in recognition of O’briens work laying out what we now call Old South Head Road. In 1851 Edward Smith Hall and Francis O’brien increased the area of the grant to 200 acres of land, which included the entirety of what is now Bondi Beach. Their estate was named The Bondi Estate. Between 1855 and 1877 O’brien purchased Halls portion of the grant, renaming the estate The O’brien Estate and allowing public use of the beach and surrounding area.
Soon though, the beach was becoming very popular, with flocks of tourists visiting. O’brien threatened to block access to the area, which at the time, was his land. The newly formed council wanted the beach to remain public, and asked the government of NSW to make it so.  In 1882 Bondi Beach became a public beach and two years later, in 1884, tram services began to run to the beach.