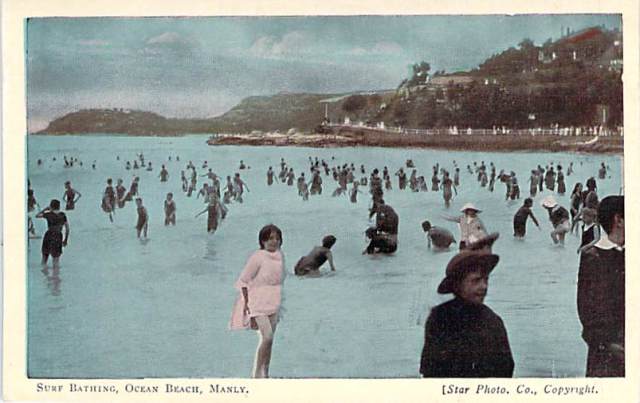 This week, with the weather heating up and many Sydneysiders beginning to get into the Summertime beach culture, it seemed the perfect time to share this image of ‘surf bathing, Coogee’. Today, we are often used to seeing beaches full of people, often clad in reasonably skimpy swimmers, enjoying their modern take on ‘surf bathing’. Yet as this postcard shows, although surf bathing has a long history in Australia, it has changed a lot over the years – especially the clothing choices!

Although we don’t often use the term surf bathing today, swimming at the beach (or in the surf, hence the name) was, and continues to be, an extremely popular pastime for Sydneysiders, and Australians more generally. Since the earliest days of European colonisation, and doubtless before, the sea has been a popular way to cool down on a hot Australian summers day. Yet until 1902, you certainly would not have seen a scene like the one above. For many years, bathing in public during daylight hours was illegal, but in 1902, Mr William Gocher broke the law. In September, at Manly, he swam during daylight hours, breaking the Australian law against swimming during ‘prohibited hours’ (which was essentially any daylight hours. Soon others were following his example and also challenging the law. They forced the issue of daylight swimming, and before too long, the law was changed, allowing daylight bathing to occur without risk of penalty or prosecution.

Of course, the next problem arose around what was proper dress for surf bathers. As the image above shows – it was vastly different to what we consider appropriate today! Come back next week to find out more.