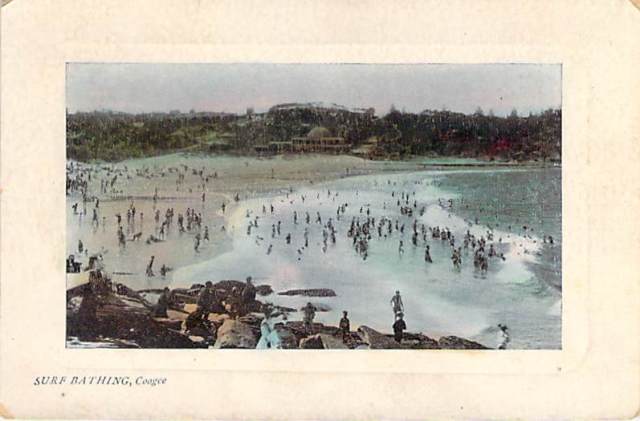 This week, with holidays nearly upon us and the beach going season well and truly here, it seemed the perfect time to share the image above, of surf bathing at Coogee. Although surf bathing, or swimming in the ocean, continues to be a popular Australian pastime, there have been many changes to beach culture over the years, not least in the standard of dress.

Even after laws which prohibited daytime swimming in Australia had been changed, there continued to be a moral conundrum concerning propriety, and what was appropriate to wear for swimming, especially as daylight swimming allowed bathers to be seen! Although concessions had to be made to allow bathers to move (vital if drowning was to be prevented), many people were offended by what they saw as inappropriate ‘exhibitionistic’ clothing, which displayed much more of the figure than people in the early 20th century were used to. As a result, many councils enforced their own laws which imposed minimum standards for beachwear.

One of the more famous of these laws was proposed by Waverly Councilin 1907. They tried to impose a law which required men to wear bathers which had sleeves to the elbow and a skirt extending to their knees. Although many supported strict regulations about swim wear, these laws went too far! One of the first actions of the Surf Bathing Association of NSW, which was the precursor of Surf Life Saving Australia, was to protest against these proposed requirements. They were concerned that the bathers would emasculate men and organised a public protest which took place at Bondi, Manly and Coogee. Men flocked to the beaches wearing womens clothes, underwear and even curtains or tablecloths and essentially made a mockery of the proposed swim wear. The general public and media both viewed the protests very positively, and the council abandoned their new laws.