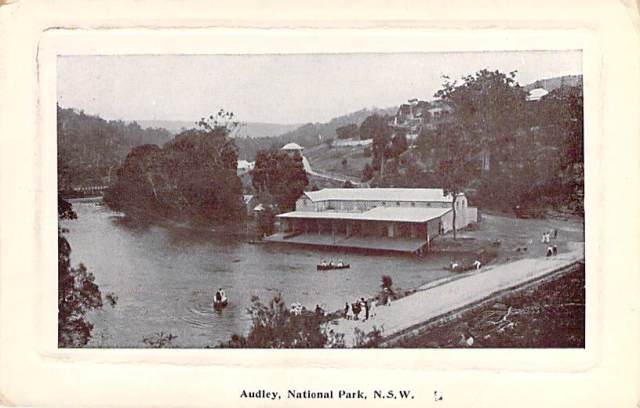 This week, with the weather continuing to be so wet and dreary, it seemed a perfect time for The Past Present to examine the image above. Audley Weir in the Royal National Park is a popular place for visitors and tourists with boating, fishing and bushwalking being popular pursuits. Yet the weir also acts as a river crossing, and during times of extended or heavy rain, the river rises and floods the road, sometimes closing it entirely.

European explorers visited the area which now encompasses the Royal National Park in the early 1800s, but they reported that the land was not favourable for settlement due to rough terrain. As a result, although there were small settlements which sprung up around the fringes of todays park, and at Wattamolla by the mid 1800s, most of the land remained untouched bush. In 1879 the area was dedicated as a National Park, which was also to be used to acclimatise exotic species for the NSW Zoological Society, which had been formed just a few days previously. The trustees planned to create ornamental gardens, exotic plantings, a zoo and even a race course, but many of these plans never eventuated. However, the main focus of recreation within the park was to be Audley, and soon a holiday camp with a number of buildings was constructed. By May 1881 the camp, which was named Audley three years later in 1884, included a boathouse, jetty, cottages, a pavilion, stables and even a smithy!

The causeway itself was completed in 1883 and served two important purposes. Not only did it provide access to the other side of the river, but it created a permanent body of freshwater which could be stocked with fish and also used for boating and bathing. A new boat shed, also shown in the image above, was soon built to encourage boating in the area and soon tourists were flocking to Audley for a day out and about in the fresh air and beautiful Australian bush. Fishing and boating remain popular pastimes at Audley to this day.