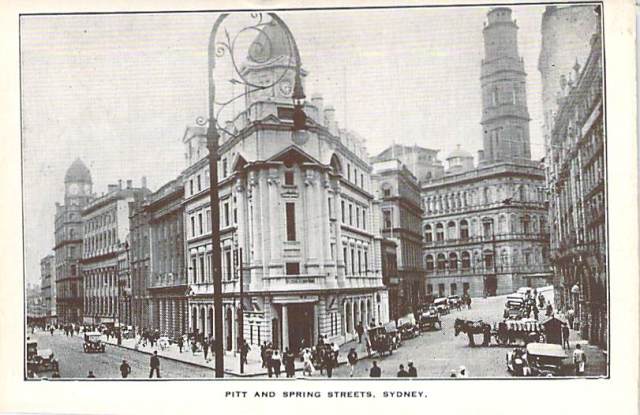 The image above is a beautiful and fascinating glimpse into the history of Sydney. Showing bustling streets full of pedestrians, horses and carts and cars, it also captures a fascinating time in Sydney, when the new automobile, and old fashioned horse power coexisted side by side.

Yet few Sydneysiders are likely to be able to tell you exactly where this intersection, of Pitt and Spring Streets, is. In fact, Spring Street, although still in existence, is just a small laneway today. Yet once, it played a fascinating part in the history of Sydney’s water supply.

When Captain Arthur Phillip (also known as Governor Phillip) arrived in Sydney he selected the site based on what became known as the Tank Stream – Sydney’s vital fresh water source. The Tank Stream was mainly fed from a swamp in the area of todays Huge Park, but there was also a number of springs along the course of the stream. One of the largest of these springs was in the locality of Spring Street.