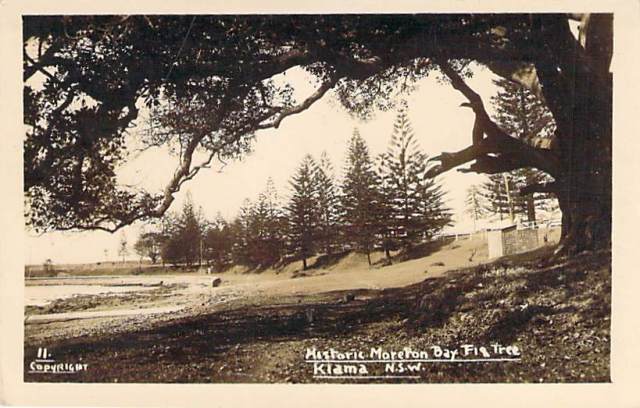 This week, The Past Present is turning attention to the area South of Sydney, an area which many people visit for day trips or holidays. Kiama is just one of the many beautiful seaside towns on the South Coast, but it is also one with a fascinating history, and some stunning trees. The tree in the image above, taken from a postcard dated circa 1910, is just one example of the extraordinarily beautiful Moreton Bay Figs which are so iconic in the Kiama and wider Woolongong area.

Moreton Bay fig trees are, just like Norfolk Pines, iconic and well recognised trees in the Kiama area. Yet the figs are not just beautiful, one of them actually played a remarkable role in the history of the area. The location of the fig tree in the image is unidentified, yet the most historic fig tree in Kiama, and possibly the one pictured, was located on Black Beach. The Black Beach fig tree was huge, and in the early years of settlement in Kiama the shady area under its branches became a meeting place for the settlers, and for visitors to the area. It was here that people waited for ships, and also here where goods brought to the area by ship were unloaded. It was under the spreading branches of this fig tree that the earliest Church services in Kiama were held. The giant fig tree was even used by Laurence O’Toole as a way to set course when he sailed the first trading vessel, The Bee, to Kiama in 1838!

The tree was so significant that the first Council Chambers in Kiama were built right next to the fig which had served as such a vital meeting place. The original fig was destroyed by storms in 1964 but so significant was it to the history of the area that another Moreton Bay Fig was planted in it’s place.