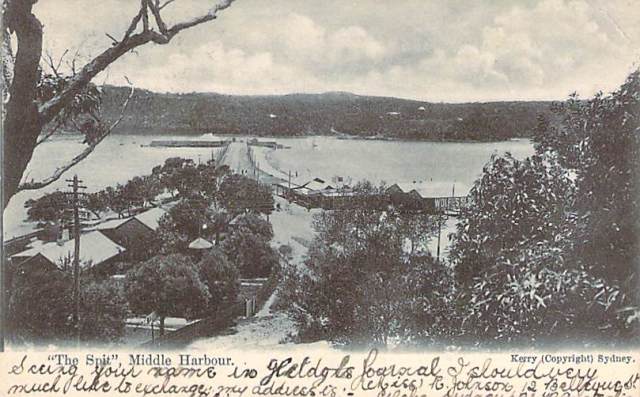 The image above is a beautiful glimpse into the history of place which many Sydneysiders and visitors to Sydney alike will be familiar with – The Spit in Middle Harbour. Today, The Spit is often associated with traffic jams and frustration, yet the crossing over Middle Harbour may once have been slower still, when ferries plied the route, instead of a bridge.

The area around The Spit, which was itself originally known as the Sand-Spit, was first settled in 1846, when John Burton purchased 30 acres at Seaforth. Peter Ellery soon followed when in 1849 he began to farm land also in the Seaforth area, opposite The Spit itself. He formally purchased the land in 1855. Often people would request Ellery to take them across Middle Harbour and so in the early 1850s, he began a ferry service, using a row boat. In 1862 though, a road to The Spit was built, and more passengers for his ferry began to arrive. Soon he changed to using a hand operated punt.

In 1871 though, the government of the day took over the ferry service, introducing a steam punt which was operated and manned by Public Works Department employees. These employees were vital to the crossing of the harbour, and to ensure that they were close by, stone cottages were constructed on the Mosman side of the Spit (the direction from which the postcard above is looking) and given to the employees and their families. It appears that you can see two of these cottages in the left foreground of the postcard. The ferry service continued to be the only crossing of Middle Harbour until the first Spit Bridge was opened in 1824.