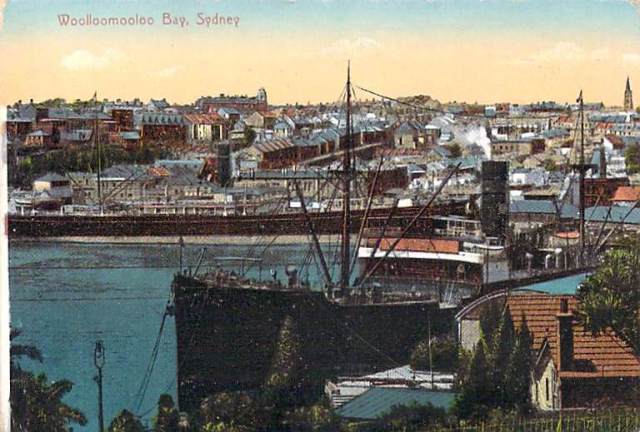 The image above provides a very different view of Woolloomooloo, which as we discovered last week, was once (and is again today) an affluent and gentrified area of Sydney. Under Governor Darling, the area had become one where the well to do lived and tended grand houses and gardens, but this wasn’t to last.

Even whilst the more grandiose houses were still being built, lowly workers cottages began to appear on the swampy areas of the Woolloomooloo Valley. By the 1850s, less than 30 years after Governor Darling transformed the area into a fashionable and well to do place, Woolloomooloo was in the throws of more change. The swamp areas had been drained and an increasing number of homes were being built for the growing working class who worked in the various maritime industries along the water front. The grand Woolloomooloo House was demolished and replaced by smaller houses while other grand estate houses were being altered to become boarding houses. Then, in 1866 the wharves were extensively expanded requiring ever more workers in the area. Pubs, brothels and of course ever more dwellings appeared, crowding the once grand Woolloomooloo area. In 1855 the Plunkett Street School was opened to cater for the growing number of working class children in the area.

Then, in 1876, authorities conducted a survey of the worst housing in Sydney. They had not planned to spend much time in Woolloomooloo, and were surprised by what they found – a proliferation of unsanitary and dilapidated houses in the area, inhabited by maritime workers and their families. By the late 1800s, any semblance of gentrification had gone from Woolloomooloo and the reputation of the area was one of squalid housing, rough working class families, and criminals, many of whom were part of the Plunkett Street Push.