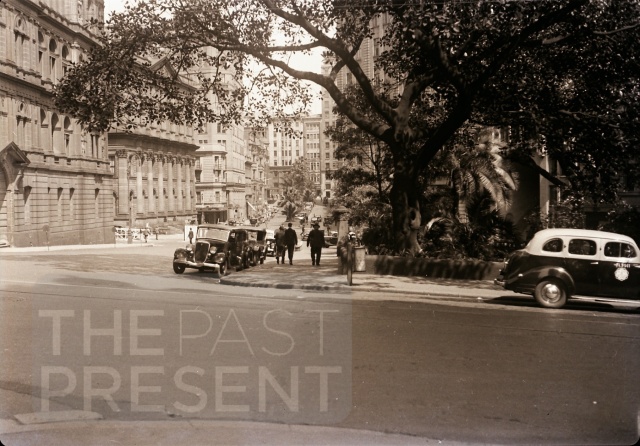 The image above captures a part of Sydney which is vital to European history, and to the story of Sydney as a city. It is a beautiful snapshot showing what, to some, is the heart of our stunning harbour city, yet it is also a place which many Sydneysiders and visitors have probably never visited – Macquarie Place Park.

Macquarie Place Park is, as the description of the photo itself suggests, on the corner of Bridge and Loftus Streets in the heart of Sydney. It is named for Macquarie Place, a street which once ran between the Tank Stream Bridge and Kings Wharf, and which is today incorporated into the park itself. The park is a green oasis amongst the bustle of city life, and has always been a rare open space in the busy city, even from the days when the city was just barely beginning.

Macquarie Place Park is a triangular shape, and once it was surrounded by the homes and residences not only of the Governor himself, but the civil officers of the colony (including the Judge Advocate, Chaplain and Surveyor). Other buildings surrounding the open space were store buildings and the homes of the most important merchants in the fledgling colony. In these early years the open space was simply left open by chance – nobody had occupied it, though some parts of the land were leased by Sydney residents and personalities. Yet in 1818 the park was formalised by Governor Macquarie as a public space, with the erection of the famous obelisk which measures distances in the colony. Just a year later a sandstone fountain was built.

The obelisk is just one of many historic structures and statues which remain in the park, though it is no longer the central feature. Once the obelisk was at the centre of the park, but when Circular Quay was built between 1839 and 1847, several streets had to be extended, and this took up areas which had been previously reserved. Today the obelisk stands at the edge of the park.