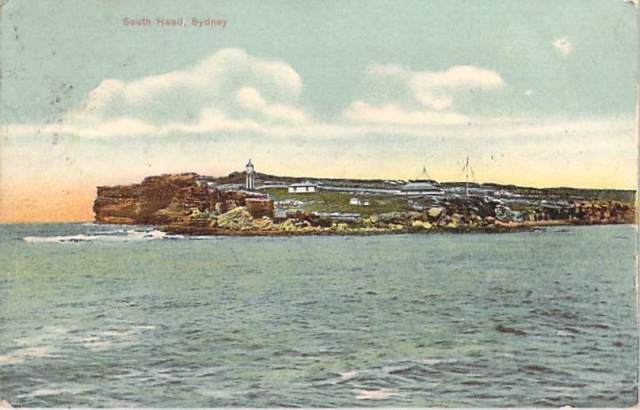 The image above is a stunning glimpse across the water and towards South Head and its cheerfully painted lighthouse, a place which holds an important place in the history of Sydney, and the colony of NSW. Yet for many Sydneysiders, the lighthouse is simply a picturesque attraction.

The Hornby Lighthouse at South Head was constructed in 1858, but the story of the lighthouse itself begins a year earlier. In 1857, two ship wrecks caused a tragic loss of life for people travelling to Sydney Harbour. The first wreck, that of the Dunbar, occurred in August just off South Head and resulted in the loss of over 100 lives. Then, just two months later, the Catherine Adamson was lost, this time off North Head, resulting in the loss of twenty one lives. The public recognised that the entrance to Sydney Harbour, although seemingly a good, broad entrance, was a dangerous one. Ships could easily miss it, or mistake other rock formations as the entrance, resulting in terrible loss of life. Thus the public quickly began to agitate for a lighthouse which would denote the actual entrance to the harbour, eliminating a great deal of the danger involved in sailing to Sydney.

The Hornby Lighthouse is quite a small lighthouse, built on the extreme point of Inner South Head. It was constructed in 1858 and opened by Sir William Denison, the then Governor of NSW and named after the family of his wife, the Hornby Family. The light was usually known by the alternative name though, the Lower Light, which was used to distinguish it from the Macquarie Lighthouse, which was not far away along South Head Road. The Hornby lighthouse, which has long been recognised by its cheerful red and white painted exterior was designed by the Colonel architect, Alexander Dawson, and is actually built of beautifully dressed, curved sandstone blocks. The light itself stands 9 metres above the ground level.