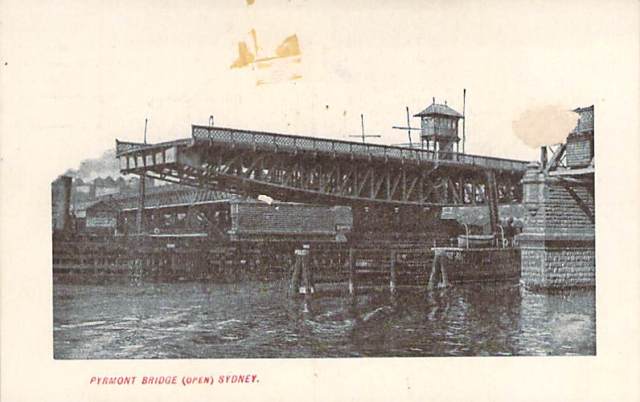 The image above is a stunning view of an famous part of Sydney’s history. Pyrmont Bridge is well known to Sydneysiders and visitors alike, being at the heart of Darling Harbour and its famous tourist district. Yet the view above is also a view which many will never have seen – the amazing bridge open, and viewed from the water.

Pyrmont Bridge is an amazing structure, and today has the honour of being one of the worlds oldest electrically operated swing bridges, having been built in 1902. Yet the bridge we see today is not the original bridge at all. Pyrmont Bridge has, since the mid 1800s, provided a vital transport link between the city itself and the growing western suburbs. Yet the bridge spanned Darling Harbour, which was then an important working harbour, with many wharves and warehouses. Tall ships needed to be able to enter the harbour and so the bridge needed to be designed in such a way that it opened to allow these ships to access the wharves. A wooden swing bridge was the answer and the first Pyrmont Bridge opened in 1857.

Then, in the late 1800s, it was decided a new bridge was needed. In 1891 a competition was held to design the new bridge, but the winning entry would never be built. It was a design for a bridge built entirely of metal and deemed to be far to expensive to actually construct. Instead, the design by Robert Hickson, the Commissioner and Engineer in Chief of the Department for Public Works, was chosen. His bridge was built mainly of timber, with just a the central swing span being metal. Construction on the new bridge began in 1899 and the beautiful swing bridge we see today was opened in 1902.

As the 1900s wore on, the type of ship bringing goods and visitors to Sydney changed, and the larger container ships no longer used the Cockle Bay end of Darling Harbour. By 1981 the Pyrmont Bridge was no longer in use, falling into disrepair and in danger of being demolished. Thanks to a public campaign though, the bridge was saved and restored as part of the redevelopment of Darling Harbour. The bridge, and Darling Harbour itself were reopened in 1988.