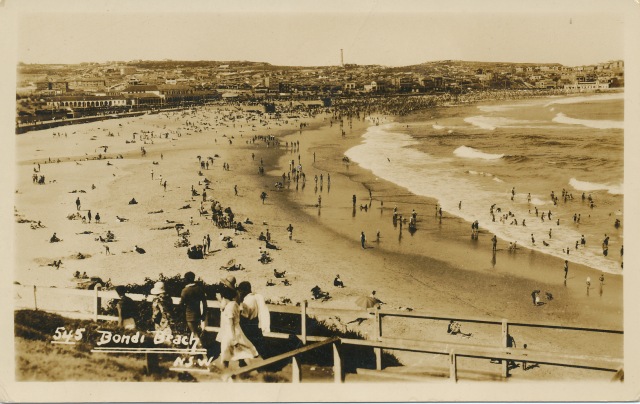 The image above is a beautiful snapshot of one of Sydney’s most famous international tourist destinations – Bondi Beach. Bondi has long been a destinational place for people to visit, Sydneysiders and tourists alike, but many who visit the iconic beach little realise the amazing history encapsulated in the area.

Bondi was once known as the Bondi Estate, and belonged to Francis O’Brien. The entire area, including the beach, was part of this estate but in 1855 O’Brien decided to open up the beach and surrounding area to the public. He opened the area as a picnic ground and pleasure resort, but many times threatened to stop access to the beach itself. Part of his reasoning, and indeed the public view at the time, was that swimming at Bondi was dangerous because of the threat of sharks and stingrays. Then, in 1882, the government itself took over the beach area, and official declared Bondi Beach a public beach.

Bondi quickly became one of the most popular stretches of beach in Sydney, with people flocking to enjoy the pristine water and white sand. Bus services were run to Bondi Junction by private operators and in 1906 the first electric tram service began to take beach goers directly to Bondi. By 1929 it is believed that 60,000 people were visiting Bondi Beach on an average summer weekend! Even in the early 1920s, when cars were not as common as they are today, upwards of 1000 cars could be found parked near the beach on a fine summer day. Today, thousands continue to flock to the beach and parking remains a significant problem.