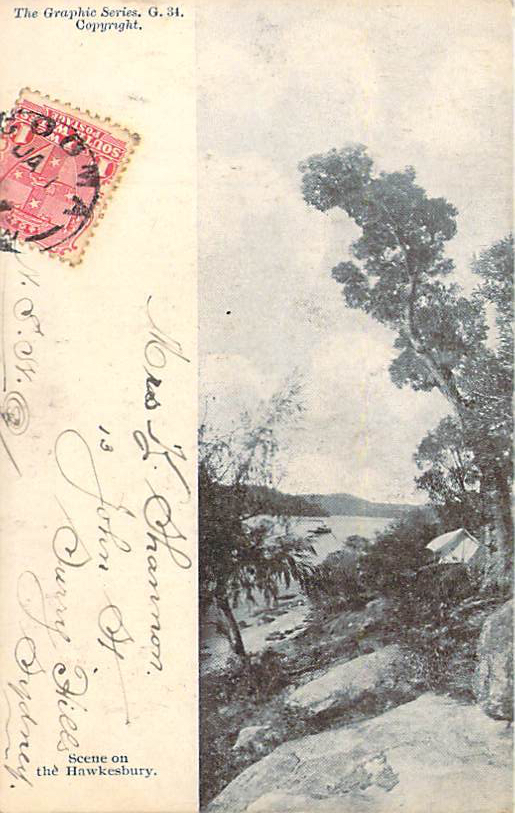 With the Easter long weekend rapidly approaching, and many people planning to brave the weather to enjoy the great outdoors, it seemed the ideal time to share the image above. The postcard image, dating from the early 20th century is an evocative snapshot not only of the Hawkesbury area of NSW, but of camping in Australia and how it has changed.

Camping has an incredibly long history in Australia. Aboriginal people lived in temporary dwellings, moving around the country from one place to another, while early European colonists often lived in tents of necessity. In fact the first fleet brought with it more than 600 tents! In the 1820s, people who visited Australia actually saw camping as the real Australian experience or the ‘Australian way’. History in Australia, and indeed the history of Australian development, is intricately linked to camping.

By the 1860s though, camping was beginning to take on a new dimension, people were choosing to set up temporary camps for recreation and holiday camping was born. Water, whether a coastal beach or quiet river meander was often a real feature of holiday camping, and even today many campers head to campgrounds on the coast or situated next to a picturesque river scene. 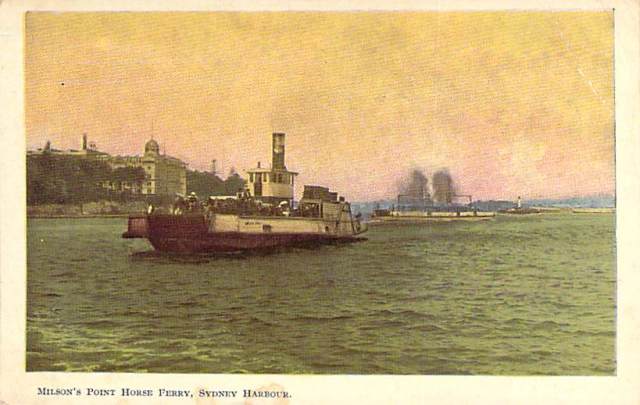 The image above is a stunning snapshot of a piece of Sydney history many are unfamiliar with. Today, we are all familiar with the Harbour Bridge, and take for granted the fact that we can easily cross the harbour by car, train, bike or bus. Many of us are familiar too with the history of the stunning bridge itself, yet we little think of what came before and how people, let alone vehicles, crossed the harbour before the bridge was built.

Before the Harbour Bridge, there were only two ways for people to move vehicles like horses and carts, or later, cars, from one side of the harbour to the other. The first was to travel to Bedlam Point and use the punt which crossed the relatively small distance of water. This was a little inconvenient for many, as it involved travelling quite a distance. The other option was to use one of the horse ferries operating on the harbour itself, like the one shown in this postcard.

When we think of a vehicular ferry today, we tend to think of cables pulling the ferry across the span of water. Yet this was completely impractical for the harbour itself, as the span of water was much too great and there were many ships which needed to move beyond the ferry point. A cable would have prevented this. Instead, steam ferries like the one in the postcard were used, transporting everything from passengers to horses, carts and produce between Dawes Point, Blues Point and Bennelong Point. There was, of course, a fee involved and each different type of passenger and vehicle was charged differently. The fees were so specific that there was even one for a ‘Chinaman with two baskets’

When the Harbour Bridge was opened in 1932 there was no longer any need for the ferries and the wharves were demolished and the boats put to other use. The remains of only one of the horse ferry wharves can still be seen, off Hickson Road in the Rocks. 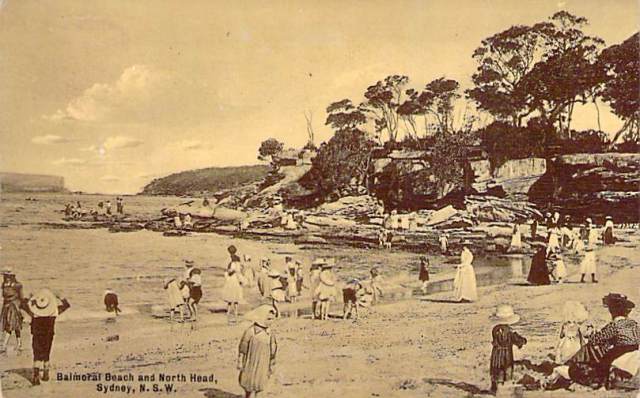 The image above is a stunning glimpse into the history not only of a popular Sydney beach, but of the way in which beach culture has changed in Australia over the past century or more. Balmoral Beach has long been a popular destination for Sydneysiders and visitors alike to enjoy the seaside and relax in the water, but the skimpy costumes which many people now prefer would have scandalised the people photographed in the image above!
Ever since the very earliest days of European colonisation in Australia, and likely before, swimming at the beach has been a popular Sydney pastime. Yet swimming as we know it today is a far cry from what those who lived in the 19th century or well into the 20th would have been familiar with. In fact, until the early 1900s, daylight swimming was illegal! In 1902, Mr William Gocher broke the law by engaging in the scandalous conduct of swimming in public during the day. Others soon followed his lead and the laws against swimming when the sun was up were overturned. Yet even after swimming became common during the day, the moral conundrums continued. Social mores of the time were against revealing more than was strictly necessary. Concessions admittedly had to be made to avoid people drowning, but swim wear was encouraged to be as discrete as possible. Cumbersome neck to knee swim suits were the norm and those who wore something a little more comfortable were criticised for wearing ‘exhibitionistic clothing’. Many councils even had their own laws setting out minimum standards for swim wear! If you weren’t swimming, social mores dictated that people visiting the beach would be dressed as they would be for any other event or outing. As the image above shows, men wore suits and women, full length dresses or skirts, hats and long sleeves.

The image above is a shot which, for many who visit the South Coast, is a familiar view. Yet for others, even those who often visit, the beautiful rock formation remains something of a mystery. So many are familiar with the Kiama blowhole, yet the amazing rock formations just a short drive away are far less known.

Pulpit Rock, and the entire set of what are known as Cathedral Rocks, are located at Bombo, just a few minutes drive from Kiama. Like the Blow Hole itself, the rocks are the remains of ancient volcanic activity, forming from lava flows which solidified to rock. Over the millenia which have since passed by, the rocks have weathered into stunning shapes and rugged formations, which today evoke the feeling of a cathedral – hence their name.

Many are unfamiliar with the striking rocks which shoot up from the sea bed, yet for well over 100 years, the area has been a popular destination for artists. As photography became a more accessible art form, photographers also made the trip to the area to capture shots of the stunning rocks and rushing sea around them. In fact, since the 1890s, the Cathedral Rocks have been bringing artists and photographers to the area to capture the rugged and ever changing landscape.