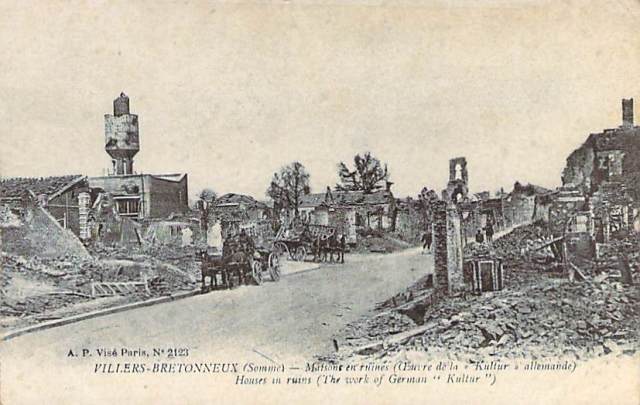 This week, with the Sir John Monash Centre in Villers Bretonneux opening, and ANZAC Day commemorations fast approaching, The Past Present turns its attention to War Postcards. The image above is a shocking and stark snapshot of a battlefield where thousands of Australian soldiers served, and many lost their lives. Today, many might find such a postcard a strange subject, and one which is a little macabre. Yet this postcard, one of a set, is just one example of postcards highlighting the destruction and devastation of war.

During the First World War, postcard publishers created many thousands of different cards reflecting the war. Some of them were humorous, others beautiful and patriotic. Some even had embroidered pockets or pictures, meant for ‘mum’ or ‘ my sweetheart’.

Yet many of them were stark and devastating reminders of the war, showing photographs of battlefields, and even of corpses. These cards, which were sometimes sold in sets, like the postcard of Villers Bretonneux above, highlighted the destruction of war. As the war progressed, they heightened feeling against the then enemy with captions like ‘The work of German “Kultur”’, as in the postcard above. As the war raged on, battlefields and destruction became opportunities for propaganda postcard publishers, and more postcards were created.