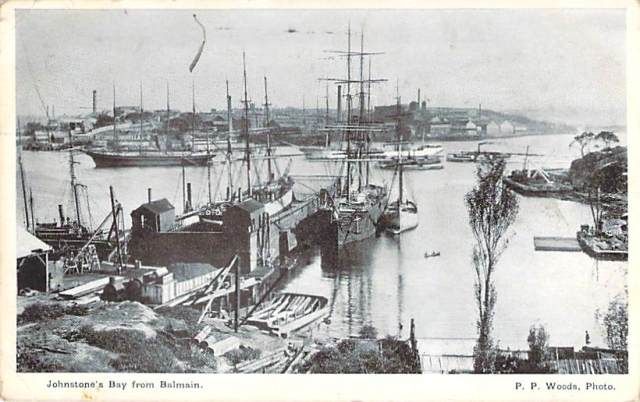 The image above is a busy view of Sydney in its maritime heyday, a time when wharves in Sydney Harbour bustled with activity. This particular view, from circa 1910, shows Johnstone’s Bay from Balmain, both areas which were involved in maritime industries.

Today, Johnstone’s Bay is best remembered and indeed identified by the bridge which spans it – the ANZAC Bridge. Yet this was not the first bridge in the area. In 1860 the first pile was driven into the harbour to build the first, wooden bridge, over Johnstone’s Bay. In 1903 it was replaced by the Glebe Island Bridge. These early bridges were built in order to make it possible for the abattoirs which were an unpleasant part of Central Sydney to be moved onto Glebe Island where they were less of a problem. Yet building a bridge over this important waterway was something which could have negatively impacted maritime industry and so both bridges had to incorporate swing spans.

Why were these swing spans so necessary? Johnstone Bay is bracketed between two important historic wharf areas in Sydney, Pyrmont and Balmain and it is no surprise perhaps that the bay itself was also used for shipping. In fact in its more recent history the bay was used as the shipping container terminal! In addition, Johnstone Bay feeds into Rozelle Bay and Blackwattle Bay, both also areas which have historically played important roles in Sydney’s maritime heritage. Even today, boats come and go under the ANZAC Bridge, in part bringing back seafood to feed the seafood trade at the Sydney Fish Markets in Blackwattle Bay.