The image above is a beautiful glimpse of an area of Sydney Harbour which many are, often unwittingly, familiar with. To be found under the gleaming white ‘sails’ of the iconic Sydney Opera House, Man O’War Stairs are a feature of the foreshore which many recognise, but may not know the name of. Today, they are a popular place to watch the harbour, but they have seen their share of tragedy.

In 1927, on November 3, one of the the greatest maritime disasters to ever occur on Sydney Harbour took place when the Royal Mail Steamer Tahiti collided with the passenger ferry Greycliffe. Although the collision occurred off Bradleys Head (now Taronga Zoo), it was Man O’ War Steps which served as temporary hospital and morgue. The afternoon of the collision was beautiful, clear and sunny. There was no storm, no wind, no swell. Visibility was good. What went so very wrong?

Tahiti was a passenger steamer, bound for New Zealand and ultimately San Francisco. She was departing Sydney on November 3, being piloted by Captain Thomas Carson and under the command of Captain Basil Aldwell who had been Captain of the ship since 1922. Both were aware of other boats on the harbour, particularly the ferries Greycliffe and Woollahra and they assumed both ferries were equally aware of them. This was not the case and Greycliffe actually charted a course which would cause it to collide with Tahiti. Although Carson tried to avoid disaster, the Tahiti was going too fast to be able to swing away from the ferry. Tahiti sounded its horn, but Greycliffe seemed to be unaware that it was even in danger. Indeed, the sounding of Tahiti’s horn startled Greycliffe’s Captain, William Barnes. Although he spun the wheel hard to try to lessen the impact it was too late. Greycliffe was hit.

40 people of all ages and from all classes died in the tragedy and were laid out in the makeshift morgue at Man O’ War Stairs. Six school children died, as well as the Science Master from Sydney Boys High School. Also amongst the dead were three doctors (including N.S.W Chief Quarantine Officer), three Navy personnel, seven tradesmen from Garden Island Dockyard, six ‘tourists’ from N.S.W and Victoria, Australia’s first woman pilot, six times Mayor of Leichhardt, an architect, a retired Master Mariner, three retired gentlemen and seven housewives.

The image above is a stunning, panoramic view of one of Sydney’s most famous and exclusive beaches. Visited by Sydneysiders and visitors alike (and the home of Home and Away, which brings more tourists still) Palm Beach has long been a popular destination for people wanting to enjoy the sand, sun and sea.

Palm Beach, which is today one of the most exclusive and expensive areas in Pittwater, was actually named for the abundance of Cabbage Tree Palms which were once to be found in the area. The traditional and original owners, The Guringai people, used the fronds from this abundant resource to create fishing lines and also to patch leaks which had developed in their boats.

When Europeans colonised Australia, the cabbage tree palms found a new use, being woven into hats to keep the beating sun at bay. In fact, Cabbage Tree Hats are, in many ways, the first distinctly Australian fashion, and the making of the hats is probably Australias first cottage industry. Cabbage Tree Hats developed because the early colonists and convicts had no idea that Australia was going to be so hot, or the sun so fierce. They soon realised that the fibre from the Cabbage Tree Palm could be woven, just as the Guringai people did to make fishing lines. The hats usually had a high domed down and wide brim, perfect for the sunny Australian climate. The Cabbage Tree Hats became such a symbol of the convict era in Australia that gangs of young men were known as Cabbage Tree Mobs, after the hat they wore. Apparently, they enjoyed crushing the hats of men who they thought were ‘full of themselves’. 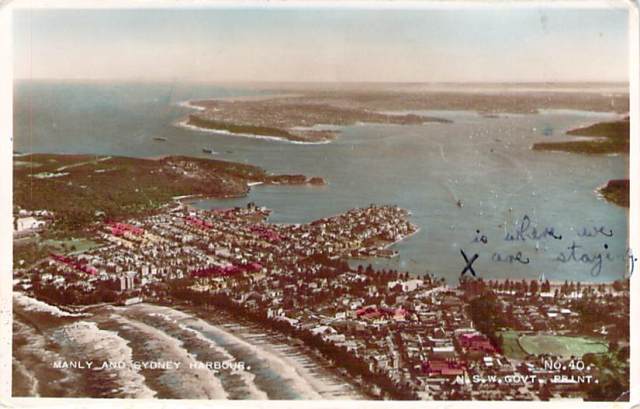 The image above is a stunning and rare glimpse into the history of the landscape of a popular seaside suburb. Manly, and particularly its famous beaches, has long been a popular destination for Sydneysiders and visitors to Sydney alike. Yet the landscape of Manly today is vastly different to that which we see in this rare early glimpse of Manly from the air.

In 1902 William Gocher, a local journalist, made a famous splash at Manly beach, going swimming in broad daylight. At the time, this was illegal and Gocher was arrested, but soon the laws changed and people began to flock to beaches and beachside suburbs to enjoy the sand, the surf and the sun. Manly was a popular destination as it was close to the city but boasted beaches and of course, it was where that first daylight swim occurred! Soon enough people were coming to Manly for holidays or even just weekend breaks and guest houses proliferated. The postcard above even has a mark on the front noting where the person sending it was staying!

As the postcard above also shows, Manly was a well developed suburb but the buildings were all relatively low. The pine trees which Manly became so famous for tower above many of the buildings, and are very dominant features of the coastline. The first ‘high rise’ building to be constructed in Manly, The Salvation Army’s Peoples Palace, was completed in 1913. Yet it was hardly a skyscraper at just 4 or 5 stories tall! Over the next century, more and more development in Manly occurred, and many of these developments towered towards the sky. Today, skyscrapers and high-rise dominate the landscape in Manly, towering over the famous pine trees, and replacing many of the old buildings which are captured in the postcard above.

As many of the readers of The Past Present will be aware, most postcards in the extensive collection focus on a place, be it a building, a beach or a park. Yet there have, over time, been many postcards created which focus instead on monuments, just as the postcard above does. The intriguing thing about this card is it has no caption, and makes no mention at all of what the focus of the statue is, where the monument is located, or why it was constructed.

After a little research, it has been discovered that the monument pictured above is located in Newcastle, in Stockton to be precise, at the Lynn Oval. Where many monuments honour a person or an event, this one honours an animal who, in her lifetime, did amazing work, not just for her owner, but for all blind people. Tessa, the dog in the photo, was a guide dog, and between 1958 and her death in 1971 she was owned by Mrs Jean Dowsett. So what was it which made this dog so special? Tessa and her blind owner were a world record breaking fundraising team! They would make the journey from their home to the Stockton Ferry Wharf, where they would ask passengers for donations to support the blind. In their years of service, they were able to raise $45000 which, at the time, was more than any other dog and owner worldwide! After Tessa died her owner wanted a monument to be created to remember the amazing dog and the Stockton Lions Club honoured this request, erecting a statue to ‘Tessa The Golden Guide Dog’ in the years following Tessa’s death. 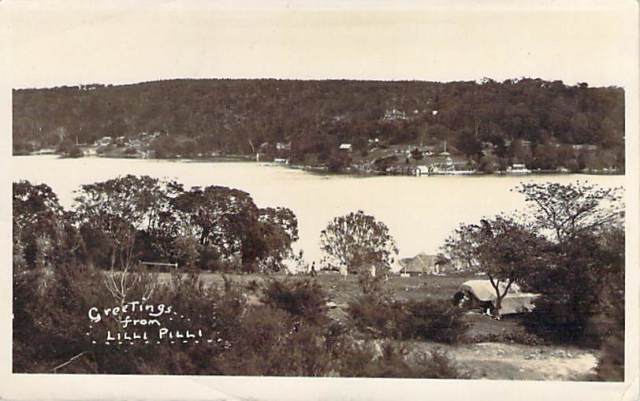 The image above is an idyllic view of life in times gone by. Many might assume that, with the bushy surrounds and tranquil outlook, Lilli Pilli is far from city life, yet this photo postcard depicts Lilli Pilli, a small suburb in Sydney, not far from Cronulla.

Lilli Pilli is, even today, only a very small suburb. It is in the Port Hacking estuary, and in the early 1800s was part of the land owned by Thomas Holt, who owned most of the land between Sutherland and Cronulla. The name itself comes from the Lilly Pilly plant, which once grew in abundance in the area, and particularly on Lilly Pilly Point.

Lilly Pilly is today one of the most popular native Australian plants for use in gardens. Yet once, it was an important bush food, used Aboriginal people as a fruit. It was also, according to some sources, pulped and used as a bush medicine for sore ears! Early settlers began to use it for making jams and sauces, before it fell out of favour. Today, the Lilly Pilly fruit (also known as riberries) is a well known bush food, as well as being a popular garden feature.