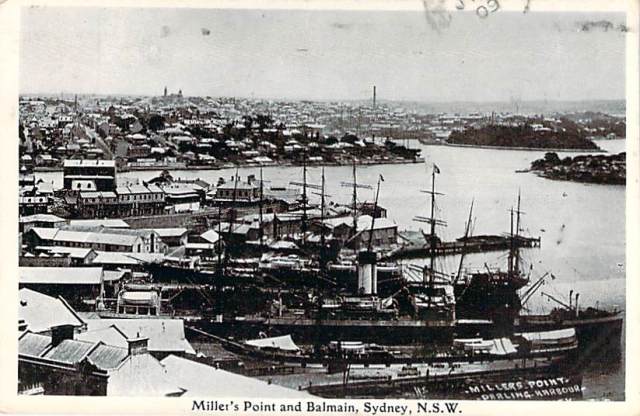 Until the 1830s, Millers Point was a reasonably deserted part of the new colony, with very few people settling in the area, despite it being close to the centre of the settlement. In the 1820s there was a military hospital and three windmills in the area (hence Millers point – named after Jack the Miller) but only half a dozen houses in the entire area. By the 1830s though, the deep water of Millers Point and its close situation to Dawes Point, were attracting more people to the area. Soon, a thriving if smelly industry focussing on whaling and sealing began to be established. By the 1840s, there were more workers cottages scattered through Millers Point and even the occasional wharf owners grand home was built.

It was in the 1850s that the maritime trade in the area really began to take off though, and by the 1860s there were even several large warehouses built on the waterfront. Yet the wharves were crowded and unsanitary, especially after the depression of the 1890s, and they made a perfect home for rats. In 1900 the bubonic plague came to Millers Point and in the wake of the disease, the area was resumed by the government and a major redevelopment began. The first, and most important part of the redevelopment was the building of new wharves and the associated docks and warehouses which were associated with a thriving maritime industry.

The image above is a stunning and beautiful view of  place which few Sydneysiders know of. Although more famous for its role in Australian tennis history, White City in Rushcutters Bay actually began life as an amusement park, not dissimilar to the now iconic Luna Park at Milsons Point.

Originally, the area where White City was to be built was occupied by market gardens and supplied produce to the Sydney market. Yet in 1913 Cosen Spenser established White City. Cosen Spenser was a well known film entrepreneur, and White City was based on many parks which had been built overseas and which he was familiar with. The main inspiration was the famous White City amusement park in London, but the name also reflected the shining white buildings which Spensers park was dominated by. The buildings, which looked grand and expensive were actually timber which was then covered in a layer of chicken wire and plaster, creating the iconic white look. They were designed and built by T.H Eslick, who was also the man behind the design and construction of Luna Park in Melbourne.

White City amusement park boasted many attractions, including a fun fair, music hall, ballroom and fairground, as well as what was termed ‘seasonal entertainment’. Among the many attractions there were a Japanese Village, giant carousel, fun factory and scenic railway. The roller coaster at White City was even more historic, being the first roller coaster in Australia! Of course, the amusement park drew huge crowds and was extremely popular. Yet in 1917, a lightning strike hit the park and started a fire which destroyed the popular attraction. The following year White City Limited went into liquidation and all the remaining assets were sold.

This week, with so much talk about the upcoming horse racing season, and the many important races which are to take place, it seemed the ideal time to share one of the amazing photos of Randwick Racecourse in the Past Present Collection. The photo above, which was taken by an unknown photographer in circa 1936 shows

Today, the Melbourne Cup may be one of the most, if not the most famous race in Australia. Yet the Melbourne Cup is far from the only important race run in Australia, and the racecourse where it is held, Flemington Racecourse, is not the oldest. In fact, in the early years of the colony racing was a very popular pastime and several basic racecourses were established. Yet by the 1830s these oldest of racecourses had stopped operating for a variety of reasons, leaving Hyde Park the main centre of horse racing at the time. It was clear that a dedicated horse racetrack was needed though and in late 1832 a group of gentlemen petitioned Governor Bourke to set aside land near Botany Road. In 1833, after the land had been surveyed and found suitable, the petition was granted and the course, then known as ‘the sandy course’ was soon in operation. Yet by 1838, racing had stopped again.

This could have spelled the end for Randwick Racecourse, but in 1858 racing returned. The Australian Jockey Club, which was established in 1842, wanted a place to establish a permanent racecourse with good facilities and petitioned the Government to grant them the old Sandy Course. The grant was allowed, the facilities and track were improved and the first race, held in May 1860, was attended by a crowd of over 6000 spectators. With the extension of the tram service to the course in 1880 the future of the course was assured. By 1900 the tram was so popular that a dedicated loop station was built simply to service the racecourse, and at its peak the trams carried 117,480 passengers in a single day in 1834!

The image above is a glimpse into the history of an area of North Sydney which today looks very different. In fact, the view above is so changed today that many may not recognise the location of this shot! Once, Folly Point and the Cammeray area more generally were dominated by dairies and quarries, but today the area is vastly changed, a built up area of homes, gardens and tree lined streets.

Cammeray is named after the Cammeraygal, the Aboriginal group who lived in the area. Though this name has a clear derivation, the name Folly Point is a little more mysterious. Such an evocative title – but what was the folly to which the name refers? Sadly nobody truly knows how the name came to be. There are two main theories though. Some suggest the area is named after Captain Charles McKinnon who was the commander of explosives hulks moored in the Seaforth area. The folly itself in this theory remains something of a mystery. The second theory suggests that a landowner in the area, by the name of Levy is responsible for the name. Apparently he built his house on Folly Point, but he mixed his mortar with the salty sea water and the house collapsed. The name folly refers to the fact that he then did the same thing again, with the same results.

However the area came to be named, it is an area which has played an important role in Sydneys Depression era history, not just in the Great Depression but also the previous 1890s Depression. During the earlier period of depression a shanty settlement grew up in the bushland at Folly Point. It was known as Tin Town and became home to many out of work Sydneysiders. It was also during this period that talented Australian poet Barcroft Boake tragically committed suicide at Folly Point, hanging himself with his stockwhip. Tin Town persisted after the depression ended and when depression again hit in the 1930s it was still a working settlement. Again, the unemployed moved into the rough tents and shacks.