This week, with Summer just getting under way, and the school holidays rapidly approaching, it seemed the perfect time to share this image of fun and recreation on The Georges River. Boating and enjoying the amazing Australian bush and waterways will be a popular pastime for many this summer, yet in Australia, and indeed on the Georges River itself there is a long history of holidaying and day tripping on the river.

With stunning scenery, as well as an easily traversable waterway, people have long made the trip to the Georges River to enjoy a day in the great Australian outdoors. In the early 1900s, a few business minded locals began to use motor launches to carry picnickers, holiday makers and day trippers to scenic places along the river. Others simply used their motor launches to offer a type of cruise, allowing visitors to the area to enjoy a day on the river in comfort.

Mr J. Latty was one of these enterprising locals. Living in Fairfield, not far from the river, he saw an excellent business opportunity and, according to an article in The Cumberland Argus and Fruitgrowers Advocate (September 11), in 1907 he organised for a new motor launch to be built. Latty’s Motor Launch, as it was seemingly known (at least, according to the postcard above) was a large launch with the ability to comfortably seat 20 people. Latty’s Motor Launch was just one of the many which plied the Georges River, but was extremely popular. 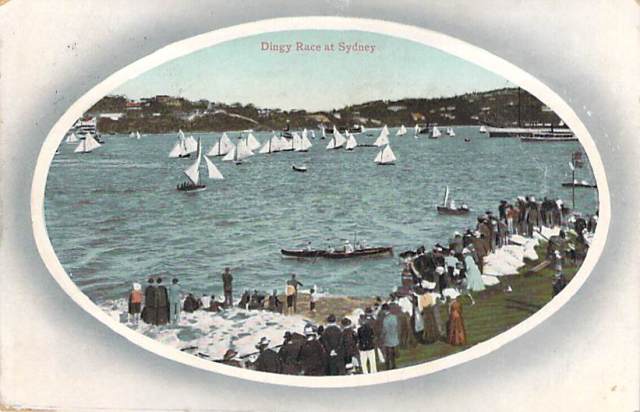 This week, with Summer just around the corner and plenty of wind around, it seemed the perfect time to share the image above. Getting out and about on the water has long been one of the favourite pastimes of Sydneysiders and visitors alike and this postcard from circa 1910 shows just one of the ways Sydneysiders have long used to enjoy the beautiful harbour – sailing. What’s more, it shows the competitive side of the sport, with people gathered to partake in or watch a race.
Recreational sailing in Sydney is very strongly linked to the nature of the harbour itself. Even from its earliest days as a British colony, Sydney was a seaport with the early colonists settling close to the coast. Yet despite being a British colony, the way that the sport of sailing developed in Australia was very different to that of England. In England, sailing was a pursuit enjoyed just by the upper classes, but in Sydney it was an extension of many peoples normal working lives. In fact, in the very earliest history of racing on Sydney harbour, the captains of visiting ships would organise the races. The races used the crews of the visiting ships and smaller boats which were carried on the decks of the ships. Some even carried a special, modified racing boat! Soon enough these races were becoming a public event and the popular regattas were even seen a great way for the harbour city to celebrate holidays (complete with the added diversions like drinking and gambling). As early as 1828 an annual ‘Anniversary Regatta’ was organised to celebrate the foundation day of the colony.
In the later 19th century and into the 20th century, many of the races featured the ‘great Sydney type’ boat as it was known – an open boat with as much sail as could possibly be crammed into the space allowed. These boats developed from the working boats of Sydney Harbour – skiffs, fishing boats, ships boats and the like. They had no keel to stop them capsizing so they also required large crews who acted as a live ballast. The boats were relatively inexpensive, making them popular with the working classes in suburbs such as Balmain and Pyrmont. The racing of these open boats was also very popular as a spectator sport as these races offered an element of spectacle missing from yacht races. Mishaps such as capsizing were not uncommon. By the 1930s open boat racing, like that shown in the image above, had become an incredibly popular Sydney pastime with thousands of spectators following the weekly race, some from aboard special steamers which were hired by the various open boat clubs. The crews of these boats were often professional crews and many played rugby in the winter months when sailing was less popular.

The image above, from a postcard dated circa 1930, captures a snapshot of a chapter in Sydney’s history which many are unaware of. Although today Rose Bay continues to be home to sea-planes, which are particularly popular for scenic flights, Rose Bay airport once had a much larger role to play in Sydney’s transport history.

Today, we think of Mascot and the Sydney airport as the home of international travel in Sydney, yet once, there was another airport at the heart of the industry. International travel by plane was, in the 1920s, almost unheard of. Yet there was a new type of plane – the flying boat – which was going to become a pioneer for international air travel. In the 1930s an airport was established at Rose Bay, at that stage on a temporary basis, to cater for these flying boats.

The Qantas Empire Airways and Imperial Airways used the Rose Bay airport – Sydney’s first international airport – as the terminus for their London to Sydney service. Of course, the planes could not make a continuous journey, and made many stops along the way, but the journey on a flying boat was luxurious and comfortable.

It was believed that in the wake of World War Two there would be a boom in international air travel. Yet while this prediction was correct, advances in the abilities of land based air craft meant that the flying boats became less popular. Plans to build further facilities at Rose Bay were put on hold as the flying boat services were gradually decreased. The last Qantas flight from Rose Bay took place in 1955, and the final commercial flight from the Rose Bay airport, an Ansett flight, took off in 1974.

With Remembrance Day nearly upon us, and marking 100 years since the end of the First World War, The Past Present is turning its attention to the amazing work done during the war. Of course, many millions of soldiers have served in war, and many lost their lives. Yet there were others who made brave contributions at the front, without ever entering into battle. The Salvation Army, was one of these groups.

During the First World War the Salvation Army played a vital role, not just in keeping the home fires burning, but in supporting the morale of troops on the front line. The Salvation Army groups of many allied countries sent representatives to war ravaged countries, including France, where they set up canteens, rest facilities and hostels. Often these facilities were not far from the front line, and the Salvationists were themselves in great danger, but they served as friends, confidants and comforters to many troops despite the dangers.

One of the most famous roles of the Salvation Army, particularly of the ladies who served in war torn countries, was serving doughnuts, as the image above shows. The first Salvation Army doughnut was, according to legend, served by Helen Purviance, a Salvation Army ensign from America. Cooking over a wood fired stove, and frying just seven doughnuts at a time, in the first day Purviance and her girls served 150 doughnuts to troops who patiently waited in line, standing in the mud and being pelted by rain. The next day they cooked double this number and later, when properly equipped, Salvation Army canteens would serve up to 9000 doughnuts a day to eager troops.