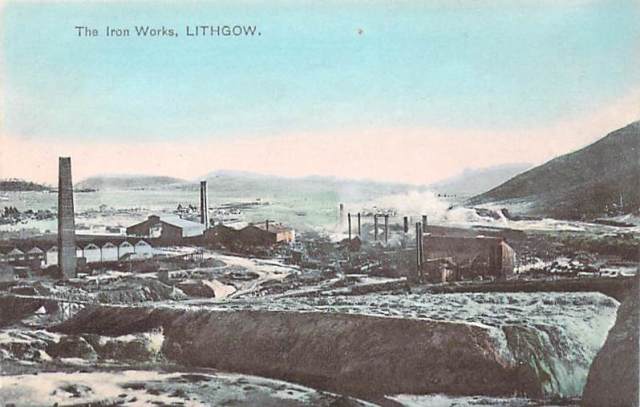 The image above is a stunning view over what was once one of Australias most important industrial sites. Producing iron and steel for the Australian market, and using local ore and coal, the iron works were a major part of Australian industry. What’s more, the iron works was one of the first iron working sites in Australia, making it a significant pioneer of the industry.

Today, the Lithgow Iron Works are in ruins, but once, they were a thriving industrial centre, and an important employer. They were even the site where Australia’s first steel was produced!  Although the image shows the 20th century iron works, the history of iron working in Lithgow dates back to 1875. Iron ore had been discovered in Lithgow, on land belonging to Enoch Hughes. Soon, a small iron works was established to extract the metal and by 1880 the Lithgow iron works was producing enough pig iron to create four miles of rails for the railway each week.

In 1901, the son of William Sandford, who was the primary owner and manager of the iron works and Eskbank Colliery, successfully produced a viable amount of steel. Tapping steel was a major success as iron and steel was basic necessities for many other Australian industries and Sandford believed the quantities made needed to be increased. In 1901 he bribed parliamentarians to win a tender to supply iron and steel. Part of the deal made at this time was the construction of a new blast furnace – the furnace in the image above. The new blast furnace was ‘blown in’ in 1907, but by this time Sandford was financially and mentally stressed. In December of 1907 the bank foreclosed on the iron works, and the Hoskins brothers soon took over the company. They extended the government contract to produce iron and steel to the end of 1916 and soon the site was so successful that 80 coke ovens and a second blast furnace were added. Yet the blast furnace and iron works at Lithgow were not to be long lived. By the mid 1920s it had been decided to move the iron working operations to Port Kembla, as the access to transport and natural resources was better. The blast furnace site in Lithgow closed in 1928, just 21 years after it had been blown in. 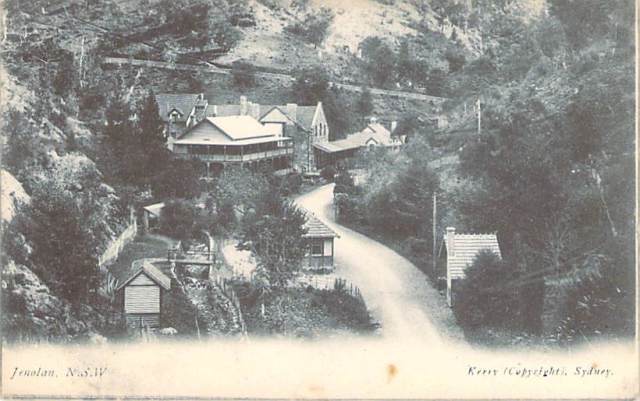 This week, with the holidays rapidly approaching, it seemed the ideal time to share a series of beautiful images of Jenolan Caves. The cave complex at Jenolan is an iconic tourist attraction in NSW, and has a fascinating history, which The Past Present will explore over the coming weeks.

Although today Jenolan Caves is an iconic tourist attraction, for many thousands of years the series of caves was known to and extremely important to Australia’s Aboriginal Peoples. The Jenolan Caves area itself is in the traditional lands of the Burra Burra people, who are one of the clans belonging to the Gundugurra Nation, though they have been used much more widely.

According to Dreamtime stories, the Jenolan area was created when Gurangatch (who was part eel and part fish) battled with Mirragan (a native quoll). Mirragan chased Gurangatch, carving out rivers and caves during the fight. Eventually, Gurangatch settled at Jenolan Caves, resting and healing his wounds by licking them. Aboriginal people believe you can still see his blood on the rock walls as you leave the grand arch. Gurangatch’s peaceful thoughts have become part of the landscape, and Jenolan is a peaceful, restorative place according to Aboriginal culture, especially for women, who are represented by flowing water.

The waters themselves are in fact seen as nadyung, or healing waters, and for thousands of years Aboriginal people from many different nations came to bathe in these waters. Sometimes their journey to the caves took days, and sick people were often carried to the underground waters, deep in the caves, from long distances. Indeed, the Aboriginal people were very familiar with these caves, long before Europeans colonised Australia.

This week, with the weather having been a little cooler, it seemed the perfect time for the Past Present to turn attention to a popular picnic spot in the Sydney area. Bents Basin, which is a State Conservation Area near Penrith has a long history of being a popular destination for Sydney siders looking for beautiful scenery, peace, quiet, bushwalking and even swimming.
Bents Basin is what is known as a ‘scour pool’ – a geological formation created over a long period of time by repeated, fast flowing floodwaters which rush out of the gorge. The basin, which resembles a small lake, is up to 22metres deep and has long been popular for fishing, swimming and boating. The Aboriginal people of the Gundungurra, Dharawal and Durug people are the traditional owners of the area, and they know the basin as Gulger (which means spinning or whirlpool). According to local stories the basin is home to a terrible water creature called Gurungadge or Gurungaty, but none the less, it was also an important area for trading between the Aboriginal peoples.
The first European to sight Bents Basin was Botanist and Explorer George Caley. He visited the area in 1802, and later returned to collect plant specimens. Later still, early travellers used the basin area as a stop over on their trips east, and in the 1860s an inn was established. As time continued on, the area became popular as a picnic area and centre of leisure for many living in the Sydney Basin area. 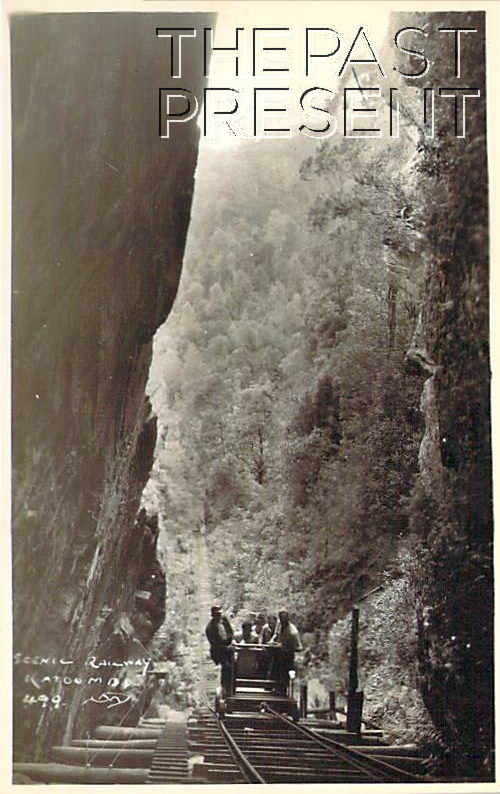 This week, The Past Present decided it was time to again investigate an historic location outside of the Sydney area. Australia is full of historic towns and even isolated places and buildings have their story to tell. Lithgow, which many Sydneysiders are familiar with, is one of these fascinating historic places, and looks at once similar and yet markedly different to the view captured in the postcard above.
Lithgow, which is named in honour of Governor Brisbane’s private secretary, was named in 1827 by by Hamilton Hume, just three years after the first Europeans arrived and settled the valley. Yet settlement in the valley was slow, and by 1860 only four more settlers had arrived. In 1869 though, the Western Railway Line (using the famous Zig Zag Railway) was built to Lithgow and the area quickly grew. With a combination of coal fields and easy transport by rail, various industrial workings soon began to appear, and the already established woollen mills prospered. In 1875 a Blast Furnace was built and by 1900 steel, the first to be smelted in Australia, was being produced. A meat refrigeration plant was also established in 1875 and soon there were breweries, brickworks, copper smelters and even pipe and pottery workings established in the valley. In the early 1900s a small arms factory was also added to the vibrant working town.
Today, most of these industrial workings have long since closed, becoming historic sites rather than booming businesses. Yet the postcard above captures Lithgow in its industrial heyday, including the plumes of smoke from the smelting works which would once have been such a part of the skyline.

This week, with school holidays upon us, The Past Present is focusing on a holiday favourite – The Scenic Railway in Katoomba. This postcard, which dates to around 1935, shows the Scenic Railway in its early years as a tourist attraction. Although today we think of the Scenic Railway, the steepest incline tramway in the world, as a kind of tourist rollercoaster, it began its life as a working tramway, servicing mines.

The Scenic Railway was just one part of a network of tramways which serviced kerosene shale and coal mines in Katoomba. The tramways were built to bring coal and kerosene shale to the railway siding which was constructed in 1882. By 1895, the mines in the area were struggling and when in 1925 the Katoomba Colliery was registered, the tramways were decrepit. The Katoomba Colliery aimed to reopen the mine situated at the bottom of the hill, and sell coal to the Katoomba Power Station, the local hotels and residents. They needed a way to get the coal to the top of the hill though, so they set about fixing up the tramway which became known as The Scenic Railway.

In the late 1920s, the Scenic Railway had its first non-coal related passengers, a group of bushwalkers who were hauled up in a coal skip. Management realised the potential of the tramway and built seats into some of the coal skips. When The Great Depression struck, the mine closed, but the tramway continued to operate, now focusing on passengers and tourists. They replaced the coal skips with a specially built passenger car called ‘The Mountain Devil’. The rest, as they say, is history!