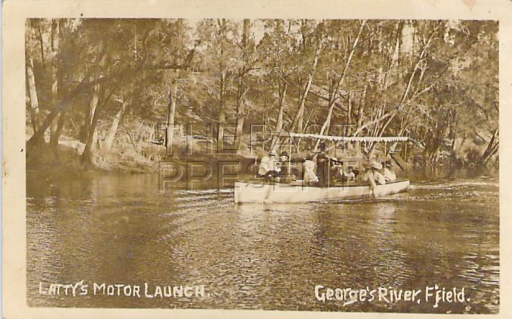 With beautiful scenery and a waterway to navigate, people have made the trip to the Georges River for many years to enjoy a day in the beautiful natural surroundings. In the early 1900s, some enterprising locals began to run motor launches on the River to carry picnickers and day trippers to scenic spots, or simply allow them to enjoy a day on the River in comfort.

Mr J. Latty was one of these men. He lived in Fairfield and in 1907, according to an article in The Cumberland Argus and Fruitgrowers Advocate (September 11), he had a motor launch built which could comfortably sit 20 picnickers. The launch plied the Georges River and was very popular. The postcard captures the Latty Motor Launch, full of picnickers enjoying a day out.

In 1927, on November 3, one of the the greatest maritime disasters to ever occur on Sydney Harbour took place when the Royal Mail Steamer Tahiti collided with the passenger ferry Greycliffe. Although the collision occurred off Bradleys Head (now Taronga Zoo), it was Man O’ War Steps which served as temporary hospital and morgue. The afternoon of the collision was beautiful, clear and sunny. There was no storm, no wind, no swell. Visibility was good. What went so very wrong?

Tahiti was a passenger steamer, bound for New Zealand and ultimately San Francisco. She was departing Sydney on November 3, being piloted by Captain Thomas Carson and under the command of Captain Basil Aldwell who had been Captain of the ship since 1922. Both were aware of other boats on the harbour, particularly the ferries Greycliffe and Woollahra and they assumed both ferries were equally aware of them. This was not the case and Greycliffe actually charted a course which would cause it to collide with Tahiti. Although Carson tried to avoid disaster, the Tahiti was going too fast to be able to swing away from the ferry. Tahiti sounded its horn, but Greycliffe seemed to be unaware that it was even in danger. Indeed, the sounding of Tahiti’s horn startled Greycliffe’s Captain, William Barnes. Although he spun the wheel hard to try to lessen the impact it was too late. Greycliffe was hit.

40 people of all ages and from all classes died in the tragedy and were laid out in the makeshift morgue at Man O’ War Stairs. Six school children died, as well as the Science Master from Sydney Boys High School. Also amongst the dead were three doctors (including N.S.W Chief Quarantine Officer), three Navy personnel, seven tradesmen from Garden Island Dockyard, six ‘tourists’ from N.S.W and Victoria, Australia’s first woman pilot, six times Mayor of Leichhardt, an architect, a retired Master Mariner, three retired gentlemen and seven housewives.

When we visit the Opera House today, chances are we are there to soak up the culture and atmosphere of this astounding building. With its gleaming white ‘sails’ and world renowned concert experiences, it is an attraction in and of itself. Yet it is a relatively recent addition to Bennalong Point and the site has a fascinating history prior to the Opera House being built. Man O’ War Steps, pictured in this postcard image (the postcard was posted in 1918) are on the Eastern side of Bennalong Point behind the Sydney Opera House, and were built as a landing point for the Australian Navy, serving for 150 years as the place where navy men left the city to see active service. Those who survived, returned to the city by the same place. This postcard, which carry’s the message “My dear Kid, one x is my house, what do you go on it, this is where we are at present, the other x is where we came ashore. Love to all, Willie” may well have been sent by one of these servicemen. Yet war is not the only tragedy which is echoed in Man O’ War Steps.

Come back next week to learn about the tragic role of Man O’ War Steps in one of the greatest maritime disasters to take place on Sydney Harbour. 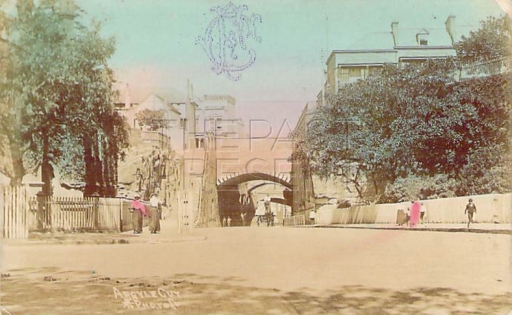 Today, as we traverse the various areas of Sydney, moving as quickly as possible from one area to another, we little think about the difficulties of creating some of the roads which we use. The Argyle Cut, pictured in this postcard image (from a postcard sent in 1919) is the major link in the road connecting Darling Harbour and Sydney Cove and took 20 years to complete, at great expense and even risk to life, yet as we pass through the Cut, few of us think about its history.

Although the Argyle Cut itself wasn’t begun until 1840, Argyle Street had existed in some form since as early as 1807. The road was officially built in 1810 and ran between George Street and the sheer rock face which later became the Argyle Cut. Here the road stopped, and a set of stairs carved into the cliff face had to be used to reach Cumberland Street by foot. From there people could then reach Millers Point and Darling Harbour (then Darling Island) but they had to complete part of the journey on foot, making it impossible to move vehicles and cargo directly between Sydney Cove and Darling Harbour. Those wanting to move between Sydney Cove and Darling Harbour by vehicle though had to take the long route around either by the North or the South.

With Darling Harbour and Sydney Cove being hubs of activity, it was not long before a more efficient way to travel between them became a priority and in 1840 a team of convicts were set the task of excavating a tunnel through the rock at the end of Argyle Street to Argyle Place. When the supply of convicts dwindled work stopped for a time, but the tunnel was completed in 1859 using paid labour and gunpowder. The rock which was excavated was used in building the early stages of Circular Quay.