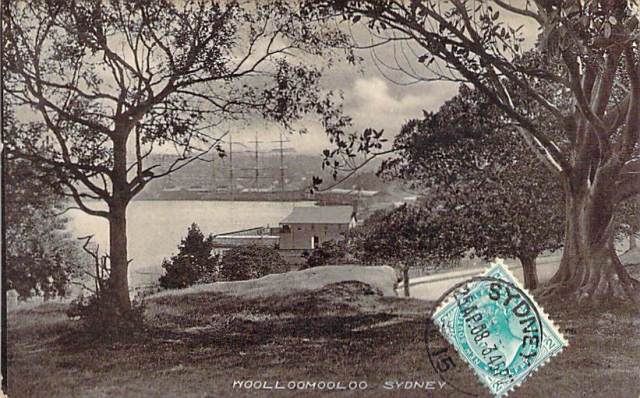 The image above is an evocative image which provides a glimpse into the history of an area of Sydney many are familiar with. Today, Woolloomooloo is well known as a trendy and affluent area of Sydney, which visitors and locals alike enjoy visiting to enjoy a touch of history, an excellent view and a meal. Yet Woolloomooloo was once a very different place, with working wharves, and working class residents.

Originally, Woolloomooloo was a valley which had a creek, known as the Yurong Creek, running through it. To get to Woolloomooloo you had to walk along a track around the rim of the valley, and this track later became Woolloomooloo Road (William Street now). Yet when the creek was in flood, the road was impassable, and besides, it was the haunt of thieves who lay in wait for travellers leaving Sydney. The land was so swampy, and flooded so regularly that early settlers didn’t want to take up grants in the area. It was good land for farming though and in 1793 John Palmer took up a grant, built a house and successfully began to farm the land – even growing tobacco! The name of Palmers home was Woollamoola House, which eventually became the basis for the name of the whole area – Woolloomooloo.

In 1822 Palmer sold his grant to Edward Riley, and by 1826 Governor Darling had decided that the area East of the town, including what was then known as Woolloomooloo Heights, on the high ground above the Woolloomooloo valley, would be a ‘high status area’. He made many land grants, but a condition of these was that residents would have to build grand houses and landscape them according to standards set by Darling. As time went by the high status grants and houses began to spread to the lower, valley areas of Woolloomooloo and the whole area became high status and gentrified. This was not to last though!

Come back next week to find out what happened next in Woolloomooloo!